CAREX Canada has developed profiles and estimates of occupational and environmental exposure for a number of known, probable, and possible carcinogenic agents. The profiles detail carcinogenic evidence, main uses, regulatory information, and the potential for exposure to the Canadian population. The environmental exposure estimates have detailed information on where people in Canada are exposed, at the national and provincial levels. The occupational exposure estimates calculate the numbers of workers exposed by industry and occupation, and where data exist, levels of exposure are estimated. Detailed information about data sources and methods are available for all estimates and profiles.

Looking for information about a substance that’s not listed here? It might be profiled on our Emerging Issues page.

CAREX Canada has developed profiles and estimates of occupational and environmental exposure for a number of known, probable, and possible carcinogenic agents. The profiles detail carcinogenic evidence, main uses, regulatory information, and the potential for exposure to the Canadian population. The environmental exposure estimates have detailed information on where people in Canada are exposed, at the national and provincial levels. The occupational exposure estimates calculate the numbers of workers exposed by industry and occupation, and where data exist, levels of exposure are estimated. Detailed information about data sources and methods are available for all estimates and profiles.

Looking for information about a substance that’s not listed here? It might be profiled on our Emerging Issues page.

Indium Phosphide and Other Indium Compounds

CAREX Canada classifies carcinogens based on evaluations made by the International Agency for Research on Cancer (IARC). IARC has classified more than 1,000 agents into different groups based on their carcinogenicity to humans. These agents include pure chemicals and chemical mixtures, occupational exposures, physical agents, biological agents, and lifestyle factors.

IARC also considers mechanistic data when assessing the carcinogenicity of different hazards. Ten key characteristics of carcinogens have been identified by IARC and can be found here.

Overall, CAREX Canada aims to determine where Canadian exposures to carcinogens are occurring, the number of Canadians exposed to different carcinogens and their levels of exposure. One of our first tasks was to prioritize which agents to focus on, as many IARC classified agents occur in environmental and occupational settings in Canada. CAREX Canada categorized IARC agents into four priority groups: immediate high priority; possible high priority; moderate priority with further substantial investigation warranted; and low priority with no evidence of use in Canada. There were three criteria considered in this prioritization process:

Two documents, one for environmental and one for occupational carcinogens, have been produced to summarize the prioritization methods and results in detail:

Our goal is to estimate Canadians’ potential exposures to the most common known or suspected carcinogens in community settings outside of work. This includes exposures via outdoor air, indoor air and dust at home, drinking water, and foods and beverages. We use a risk-based approach to produce indicators of potential lifetime excess cancer risk circa 2011. This allows us to compare substances and exposure pathways, and supports priority setting for exposure reduction or elimination activities. The indicators typically show a national average and maximum lifetime excess cancer risk, based on actual measured data, for each substance and exposure pathway.

Potential lifetime excess cancer risk is calculated by multiplying intake (the amount inhaled or ingested) by a cancer potency factor or unit risk factor. For most substances, we estimated average and maximum intake using standard breathing and ingestion rates along with average and maximum measured levels in each exposure pathway (except food and beverages).

The indicators are general estimates, and do not represent an actual risk for any specific Canadian. We assume that exposure occurs at the same level, 24 hours per day, for 70 years. This is rarely true for any single individual, but using a standard set of assumptions allows us to provide a relative ranking for known and suspected carcinogens across exposure pathways. At any one place, measured levels may change due to changes in source emissions. For any one person, intake may change over time, or as they move from place to place or change their habits.

We have also developed highly detailed maps of known and suspected carcinogen concentrations in outdoor air across Canada.

More information on these methods are available in the documents below:

Our goal is to estimate Canadians’ potential exposures to known and suspected carcinogens in the workplace. Estimates of the numbers of workers exposed to specific carcinogens have been calculated by industry, occupation, province and sex. Where data are available, levels of exposure expected in Canadian workplaces have also been estimated. These estimates are important for developing prevention strategies for cancer and other occupationally-related diseases, for targeting high-risk groups, for determining the occupational burden of cancer in Canada, and for creating new epidemiological studies that are able to increase our ability to recognize and prevent occupational cancers.

Our estimates are produced following a general approach to ensure transparency, scientific rigor, ease of interpretation, and comparability between substances. The approach is flexible, and may be adjusted for substances with unique data sources or particular challenges with respect to uncertainty. For instance, we used a modified approach to assess occupational exposure to antineoplastic agents and solar ultraviolet radiation.

CAREX Canada is committed to providing estimates that are as accurate as possible. A challenge that we face is a general lack of current occupational exposure data. This may affect both our prevalence estimates and levels of exposure estimates, especially when the use of a substance has changed substantially since the 1990s. We welcome comments and additional data sources from researchers and other stakeholders in occupational health. 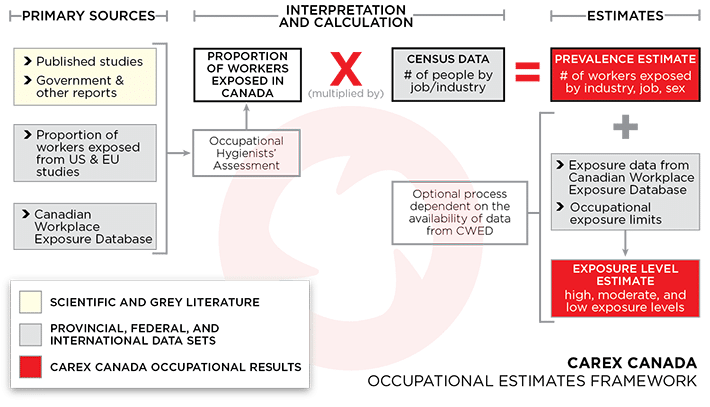 To generate the exposure prevalence estimates, we combined information gathered in a scientific literature review, data included in the Canadian Workplace Exposure Database (CWED), information from previous CAREX projects in Europe, Canadian-specific information on exposure from government and other sources, and CAREX occupational hygienists’ expert assessment. The main goal of the information collection was to gather current information on Canadian uses of a substance, potential industries and occupations where exposure may occur, and exposure circumstances. Where exposure data is available in the CWED, we identified industries and occupations where exposure has been measured. This allowed us to confirm exposed jobs and industries flagged during our literature review, and to flag new industries that we had not originally considered.

For substances with sufficient Canadian exposure measurement data in the CWED, we generated estimates of the level of exposure. Exposure concentration thresholds relevant to workplace exposure limits and cancer health outcomes were selected for each of these substances. Based on the number of measurements available in the CWED and their concentrations, exposure may be categorized into three categories: low, moderate, or high. Details of the categorization criteria are available for each substance with exposure level estimates, such as wood dust and benzene.

For more information on the approach for a specific substance, visit the Methods and Data tab for occupational exposures on each carcinogen profile.

The Canadian Workplace Exposure Database (CWED) is a national exposure database that has been created as an important part of CAREX Canada. The CWED contains measurement data on exposure to known, probable and possible carcinogens in Canada from a variety of sources.

Data from the CWED is useful for both cancer prevention and research. Some examples of how the CWED can be used are shown below.

Changes in Benzene Over Time

Workplace exposure data from BC and Ontario show that exposure to benzene declined over the 1980s. This could be due to the reduction of allowable benzene in gasoline in the late 1980s in Canada. The CWED could help show the impact of regulatory change on workers’ exposure to carcinogens.

Industry-specific Differences in Exposure to Benzene

This chart shows the mean benzene concentrations in the workplaces most frequently sampled for benzene in Ontario between 1981 and 1996. The CWED helps to identify at-risk groups of workers to target educational, regulatory, or other prevention efforts. Industries with higher exposure are not necessarily the most frequently sampled. CWED can also be used to identify industries where further data need to be collected.

Workers in gasoline stations are at risk of exposure to benzene, but in BC and Ontario, very few samples have been taken. In these cases, external data (from other agencies, countries, or published literature) can be used in the CWED to estimate exposure.