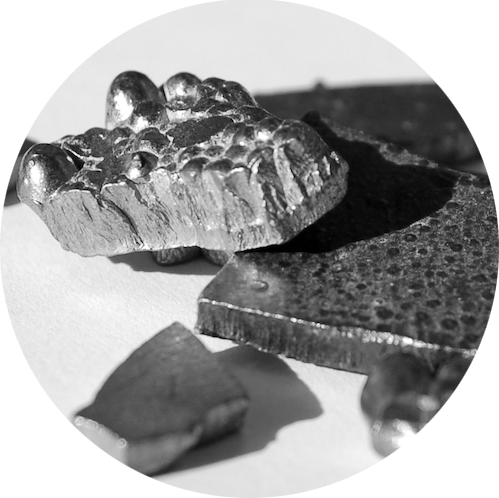 METALS – MULTIPLE CLASSIFICATIONS (IARC 2A, 2B)

Cobalt is a naturally-occurring, silvery-grey magnetic metal with properties similar to iron and nickel. Small amounts of cobalt are found in most rocks, soil, water, and organisms.[1] It is usually combined with oxygen, sulphur, or arsenic.[1] Vitamin B12, a cobalt-containing compound also referred to as cobalamin, is an important dietary nutrient.[2] Cobalt has several radioisotopes, two of which are commercially important (60Co, 57Co).[1] There are numerous other synonyms and product names for cobalt; see the Hazardous Substances Data Bank (HSDB) for more information.[3,4,5]

Cobalt and its compounds were classified by the International Agency for Research on Cancer (IARC) in 1991 as Group 2B, possibly carcinogenic to humans. This classification was based on inadequate evidence in humans linking exposure and lung cancer, but limited or sufficient evidence in animals for some specific cobalt compounds.[3] In 2006, IARC classified cobalt metal with tungsten carbide in powders, hard metals, or sintered carbides as Group 2A, probably carcinogenic to humans.[4] Epidemiological studies of hard metal workers in France and Sweden reported increased lung cancer rates in workers exposed to cobalt with tungsten carbide. However, more conclusive epidemiological evidence or strong mechanistic evidence are required to establish a causal link.[4]

Cobalt and its compounds were not included in other Canadian government guidelines, standards, or chemical listings reviewed.

The Cobalt Institute (CI) outlines the use of cobalt in: high-quality, corrosion-resistant metal alloys; in hard and soft magnetic alloys and materials; as a binding agent in cutting and drilling tools; and as a component in batteries, pigments, electronics, and medicine.[30] Further uses of cobalt are outlined on the CI’s webpage.[30,31]

The distribution of cobalt use in the US in 2006 was as follows: 49% superalloys (mainly for aircraft gas turbine engines); 9% in cemented carbide; 18% other metallic applications; 24% chemical applications.[32]

There are several Cobalt mining and refinery operations currently operating in Canada. Vale produced 1,675 t of refined cobalt metal at its Port Colborne refinery in Ontario in 2017 as well as 1,231 t of refined cobalt at the Long Harbour, NL, refinery .[33] Vale’s cobalt originated from company-owned nickel sulfide mines at Sudbury (Ontario), Thompson (Manitoba), Voisey’s Bay (Labrador), and abroad.[33] Glencore reported that 800 t of the cobalt produced at its Nikkelverk refinery in Norway originated from concentrates produced from its mines in Sudbury and Raglan (Quebec).[33] The Fort Saskatchewan refinery in Alberta, a joint venture of Sherritt and General Nickel Co. S.A., produced 3,601 t of cobalt as metal powder and briquettes in 2017.[33]

The vast majority (99%) of the general population’s cobalt intake is estimated to be from food.[36] Cobalt in dietary sources results from soil uptake by plants, and also from vitamin B12.[1] Other sources include drinking water, vehicle exhaust, and tobacco
smoke.[1]

Anthropogenic sources make up the majority of emissions. These include fossil fuel burning, sewage sludge, phosphate fertilizers, mining and smelting of cobalt ores, processing of cobalt alloys, and industries that use or process cobalt compounds.[37]

Natural sources of cobalt released into the environment include wind-blown dust, sea water spray, volcanoes, and forest fires.[37] The mean atmospheric cobalt levels at unpolluted sites are generally <1 to 2 nanograms/m3 (ng/m3). Levels near industrial sources of cobalt may exceed 10 ng/m3.[37]

Searches of Environment Canada’s National Pollutant Release Inventory (NPRI) and the US Household Products Database yielded the following results on current potential for exposure to cobalt in Canada:

Dusts and fumes containing cobalt may enter the respiratory tract, making inhalation the most important route of occupational exposure.[1]

CAREX Canada estimates that approximately 3,000 Canadians are exposed to cobalt in their workplace. The main industrial groups exposed are metal ore mining, sawmills and wood preservation, and offices of dentists. The largest occupational groups exposed include welders, dental technologists, technicians and laboratory assistants, and machinists and machining and tooling inspectors.

Workers involved in producing or handling radioactive forms of cobalt, such as those at nuclear or irradiation facilities, medicine/research or waste storage sites, are regulated and monitored under Health Canada’s Radiation Protection Bureau.[41] Exposure to radioisotopes is addressed under the CAREX carcinogen profile for Ionizing Radiation.

For more information, see the occupational exposure estimate for cobalt.