What to do about it

CAREX Canada risk estimates for indoor air show that radon is the highest priority exposure in Canadian settings. Radon is a colourless and odourless gas that is the leading cause of lung cancer among non-smokers. Health Canada estimates that radon is responsible for approximately 16% of lung cancer deaths in Canada.

Radon concentrations vary depending on local geology, soil, and building characteristics. The highest concentrations of radon are found in areas with uranium and thorium ore deposits and granite formations. In these areas, radon seeps out of the ground into surrounding air, water, and soil. This becomes a hazard if the radon gas gets indoors. Radon has been found in public buildings, schools, hospitals, and new and older homes in many places across Canada. A summary of the ways that radon can infiltrate a home are illustrated below. 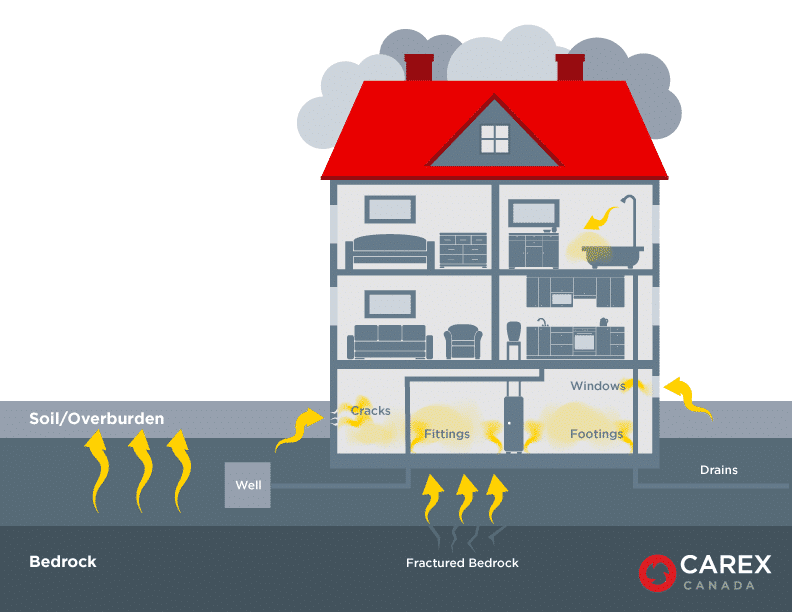 Radon is a radioactive gas that is released when uranium breaks down in the ground. It can infiltrate our homes in the various ways pictured here but mitigation strategies can reduce this exposure in both new and existing structures.

CAREX Canada has developed the following resources to help organizations better understand exposures to radon in their area:

Profile: Our carcinogen profile for radon provides general information about radon and why it was classified as a carcinogen, lists the regulations and guidelines related to radon exposure in Canada, describes how exposure takes place in workplace and community environments and offers a series of resources on how to reduce exposure. The radon profile is available here. 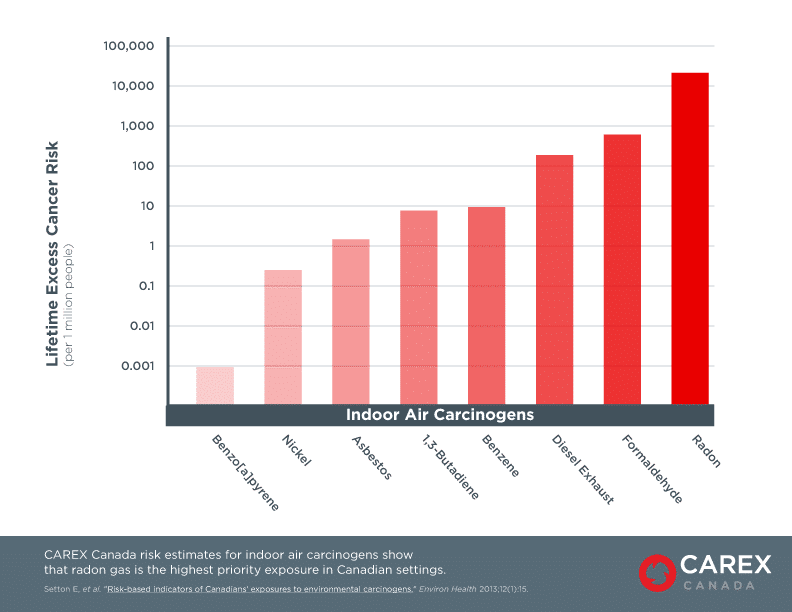 Environmental exposure estimates: Our estimates use lifetime excess cancer risk as an indicator of Canadians’ exposure to known or suspected carcinogens in the environment. Risk estimates for indoor air carcinogens show that radon gas is the highest priority exposure in Canadian settings. The full estimate is available here. 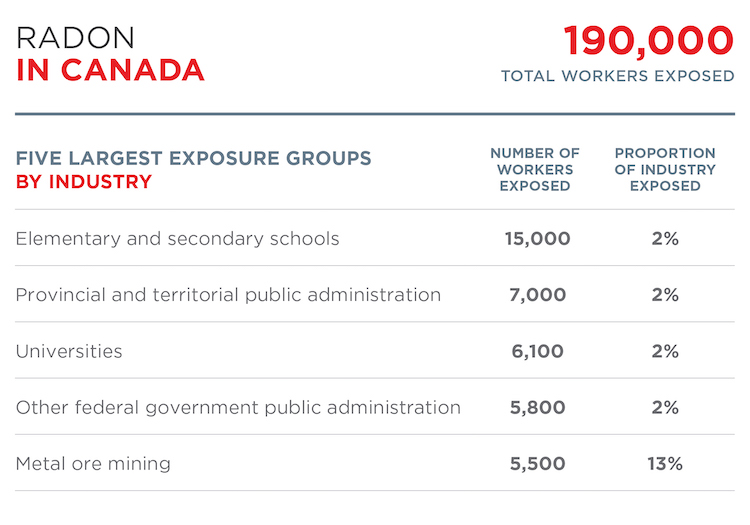 Occupational exposure estimates: These new estimates use a method tailored for assessing radon exposure in workplaces. They take into account groups such as indoor and underground workers. Results show that approximately 190,000 Canadians are occupationally exposed to radon. The largest industrial groups exposed are elementary and secondary schools, provincial and territorial public administration, and universities. The full estimate is available here.

Resources tailored to First Nations communities: We collaborated with the Timiskaming First Nation to develop a community a briefing note that explains why radon levels are naturally higher in some areas of Canada, how exposure occurs, and what can be done about it. We also co-developed brochures on radon monitoring and interpreting monitoring results. These resources are available here.

Our team was also involved in an on-reserve residential radon testing project involving three Interior BC First Nations communities that resulted in a 97% response rate for radon testing. The project team investigated the factors that led to the success of this program and offered insights into how environmental health service organizations and other groups working with First Nations communities can help to increase testing rates.

Radon in schools research: Our team contacted ministries of Health and Education, Offices of the Chief Medical Officer, and/or school boards in each province and territory in an effort to determine where school testing has occurred in Canada, if schools with elevated levels were remediated, and what challenges were encountered in testing or remediating. A summary of this effort is available here. 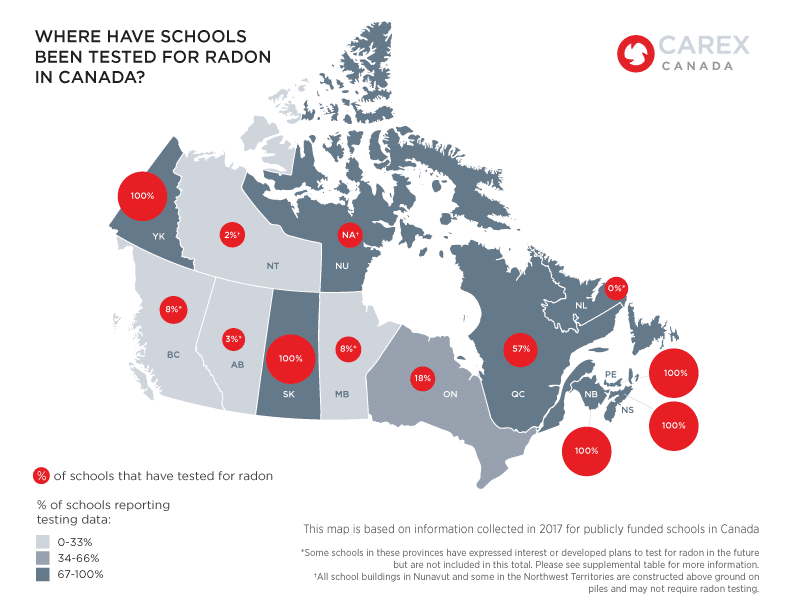 What to do about it?

The only way to know if radon gas is present is to test for it. Data from Health Canada’s most recent survey (2011) revealed that 42% of Canadian households had heard of radon, but only 5% of those households had tested for radon (up from 3% in 2009). Another Health Canada study (2018) looking at current rates of radon mitigation found that only 29% of those who had radon levels of 200 Bq/m3 or greater in the initial studies reported taking steps to reduce the radon levels in their home. Approximately 39% of survey participants who tested above 800 Bq/m3 and 43% of survey participants who tested above 1000 Bq/m3 indicated they had mitigated.

Because radon levels vary over time, Health Canada recommends using a long-term detector and testing for a minimum of three months, over the winter months if possible when homes tend to be sealed and ventilation is low. If a worker has concerns about radon levels in a workplace, he/she can request a radon test.

Radon testing is available through certified service professionals; lists of these are available through the Canadian Association of Radon Scientists and Technologists (CARST) and the Canadian National Radon Proficiency Program (C-NRPP). Homeowners can also purchase do-it-yourself kits through local Lung Associations or hardware stores, and follow the guidelines outlined by the Government of Canada for how to properly conduct a radon test. The Government recommends that the higher the radon concentration, the sooner steps should be taken to remediate the issue:

The specific methods used to remove radon from existing buildings depend on several factors, including building construction and soil type. The most effective of these methods is called “active sub-slab depressurization”, where a remediator installs a pipe through the floor slab of the foundation. This pipe is attached to a fan that runs continuously to draw radon gas out from beneath the home, to the outdoors where it is effectively diluted. For new buildings, the National Building Code of Canada encourages builders to prevent radon from entering homes by implementing what’s called a “roughed-in radon reduction system” during construction. This involves laying a polyethylene barrier under the slab, sealing the slab perimeter and all areas where pipes run through the slab, and installing airtight coverings for sump pit covers. Other remediation approaches are summarized on Health Canada’s Radon Reduction Guide for Canadians page.

How is CAREX addressing Canadians’ exposures to radon?

References and other resources