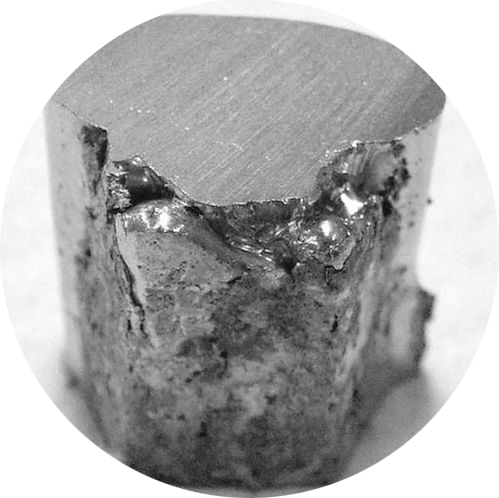 Metallic nickel is a silvery, hard metal or a gray powder.[1] It is not commonly found in nature.[2] Nickel typically exists as a trace component of many different minerals, particularly those containing magnesium and iron.[2] In Canada, nickel is usually found in sulphide ores, especially pentlandite, together with copper, cobalt, gold, and silver.[3] Nickel’s hardness, strength, and resistance to corrosion and heat make it an ideal component in alloys.[4]

Most nickel compounds are green to black in colour, turn yellow when heated, and dissolve easily in water.[1] There are numerous other synonyms and product names for nickel and its compounds; see Hazardous Substances Data Bank (HSDB) for more information.[5]

Metallic nickel and alloys were classified as Group 2B, possibly carcinogenic to humans. This classification is based on insufficient epidemiological evidence in humans and sufficient evidence for lung cancer in rats.[6] Metallic nickel also caused local sarcomas after injection in rats and hamsters. Nickel alloys display limited evidence of carcinogenicity in animals.

Working with nickel (e.g. in nickel refining or welding) can cause chronic bronchitis and decreased lung function, as well as immunological and renal effects.[4] It is not clear if these effects are due entirely to nickel, since exposure to other substances (e.g. cobalt) also occurs in these settings.[4] Nickel exposure is also a very common cause of allergic contact dermatitis. An estimated 10-20% of the population reports a reaction to nickel, usually from jewellery and other consumer products.[4] Some people who are sensitized to nickel may have asthma that is related to their exposure.[4]

Nickel and its compounds were not included in other Canadian government environmental guidelines reviewed.[27,28,29,30]

Nickel and its compounds were not included in other Canadian government chemical listing reviewed.[33]

Nickel compounds are used in electroplating, various pigments, and nickel-cadmium batteries. They also act as intermediates in other reactions.[7] The largest use of nickel worldwide is in stainless steel (65% of global usage) and other alloys (20% of usage).[34] Pure nickel is also used as a catalyst and in magnets, electrical contacts and electrodes, spark plugs, machinery parts, and surgical and dental prostheses.[1]

In 2014, four Canadian provinces (Manitoba, Newfoundland, Ontario, and Quebec) had active nickel mines.[35] Total production from those mines that year was over 218,000 tonnes,[35] with the largest amount originating from the Sudbury area.[36]

The primary source of exposure to nickel for most Canadians is food and water.[7] However, nickel is not carcinogenic via ingestion; inhalation exposure is the only pathway linked to cancer.

Nickel is found naturally in soil and in meteorites. It is also released and transported in the environment from windblown dust and volcanic eruptions.[4] Anthropogenic sources include nickel mining and industries that produce alloys or nickel compounds. Oil and coal burning power plants and trash incinerators are additional sources.[4] The type of nickel in the atmosphere depends on the emission source.[4] CAREX Canada estimates that nickel concentrations in outdoor air (moderate data quality) and indoor air (low data quality) do not result in an elevated risk of cancer.

Searches of Environment Canada’s National Pollutant Release Inventory (NPRI) and the US Household Products Database yielded the following results on current potential for exposure to nickel in Canada:

For more information, see the environmental exposure estimate for nickel.

The main routes of occupational exposure to nickel include inhaling particles and fumes, and dermal contact.[1]

The largest occupational groups exposed to nickel are welders (working with stainless steel), followed by machine tool operators, construction millwrights, and industrial mechanics. Other occupations where exposure to nickel may take place include mechanics, dental technologists, painters and coaters, and workers in nickel refineries or nickel processing plants. Occupations that involve producing nickel alloy and stainless steel, welding, electroplating, grinding, and cutting operations may be exposed as well.[4]

For more information, see the occupational exposure estimate for nickel.