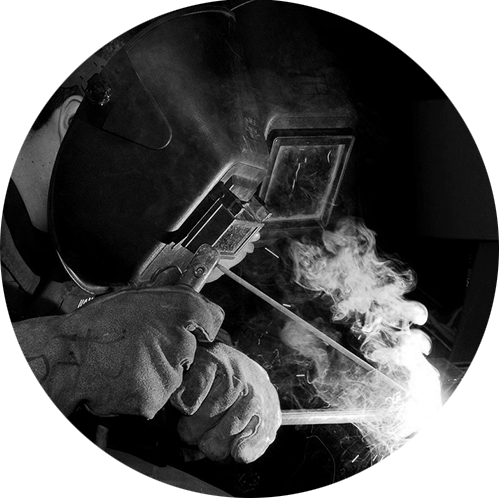 Welding is a process that uses heat generated by electricity (e.g. arc welding) or fuel gases (e.g. oxyfuel welding) to fuse metal materials. As the metals are heated, they produce welding fumes composed of a mixture of fine particles and gases. These particles, which have an aerodynamic diameter of less than 1 µm, are capable of depositing in the deepest parts of the lungs. They consist of metal oxides, silicates and fluorides. Gases are generated by the welding process itself (e.g. use of shielding gases, oxyfuel welding) and include nitrogen oxides, carbon monoxide, and ozone.[1,2,3] Welding is performed in many industry sectors, including repair, construction, mining and manufacturing. [1,4,5,6] As such, exposure to welding fumes often occurs in conjunction with other common industrial exposures linked to cancer, such as asbestos and cleaning solvents.[1] Additionally, arc welding generates UV radiation.[7,8]

In 1989, the International Agency for Research on Cancer (IARC) classified welding fumes as probably carcinogenic to humans (Group 2A).[8,9] At the time, there was limited evidence of carcinogenicity in humans and inadequate evidence in animals. New evidence from observational and experimental studies has emerged and in 2017, IARC classified welding fumes as carcinogenic to humans (Group 1). This was based on sufficient evidence showing an increased risk of lung cancer in welders and other workers exposed to welding fumes, and limited evidence showing an increased risk of kidney cancer.[1,8]

Most Canadian jurisdictions do not have an occupational exposure limit (OEL) for total welding fumes, though OELs exist for constituents of welding fumes (e.g. nickel, chromium, beryllium).[10] Many jurisdictions apply the American Conference of Governmental Industrial Hygienists’ (ACGIH) guideline for Particles Not Otherwise Specified (PNOS). This guideline applies a different reference value depending on the size of the particles in the mixture, as illustrated in the following table:[10,11]

ACGIH = American Conference of Governmental Industrial Hygienists
PNOS = Particles (insoluble or poorly soluble) Not Otherwise Specified
µm = micrometers
mg/m3 = milligrams per cubic meter *
ACGIH recommends using size-selective sampling heads when measuring airborne particulate matter. These sampling heads are designed to capture particles with an aerodynamic diameter that falls within a certain range. For example, a sampling head with a 50% collection efficiency of 4 µm means that 50% of the collected particulate matter will have an aerodynamic diameter of 4 µm or less.

The respirable size fraction poses a greater risk to health as these particles are capable of depositing in the deepest parts of the lungs.[12,13] In accordance, ACGIH recommends that airborne concentrations of PNOS be kept below 3 mg/m3 for the respirable fraction and below 10 mg/m3 for the inhalable fraction.[10] These guidelines are intended for substances that have low toxicity, however. For this reason it is often more appropriate to analyze the constituents in welding fumes individually.

Welding fumes are produced as a byproduct of welding activities. While many industry sectors use the process to join metal materials, there is no specific use for welding fumes. There are over 70 different welding processes, each having a specific application. The most common processes include shielded metal arc welding, gas tungsten arc welding, and oxyfuel gas welding.[1,4,28]

Almost all industry sectors in Canada employ welders, including repair, construction, manufacturing, oil and gas, agriculture, and the service industry.[1,4,5,6] Many workers also perform welding activities without having the official job title of a welder (e.g. construction or agricultural workers who weld intermittently but would not be classified as welders, automobile mechanics, and some artists).[1]

In the environment, the primary route of exposure is by inhaling welding fumes produced during hobby, artisan, or home welding projects. This includes a variety of activities, such as creating metal sculptures, or performing basic repairs on motor vehicles and other mechanical equipment. Typically, welding is performed in a home garage, workshop, or residential outdoor space.[29] Today, many welding courses and online resources are readily available to the general public, and welding equipment can be purchased at hardware stores. However, the number of welding hobbyists in Canada is difficult to estimate due to a lack of available data.

CAREX Canada estimates that approximately 333,000 Canadians are exposed to welding fumes in their workplaces. The industries with the highest number of exposed workers are building equipment contractors, commercial and industrial machinery and equipment, and automotive repair and maintenance.​ The largest occupational groups exposed to welding fumes are welders and related machine operators, construction trades helpers and labourers, and automotive service technicians, truck and bus mechanics, and mechanical repairers. The magnitude of exposure to welding fumes is influenced by many factors, including:[2,3,30]

According to the Burden of Occupational Cancer in Canada project, occupational exposure to welding fumes and welding lead to approximately 310 lung cancers and 15 ocular melanomas each year in Canada respectively, based on past exposures (1961-2001).[31,32] This amounts to 1.3% of lung cancer cases and 5.4% of ocular melanomas diagnosed annually. Most occupational lung cancers associated with welding fumes occur among workers in the manufacturing sector. These cancers also occur among workers in the trade, other services, and construction sectors. Work-related exposure to welding fumes resulted in approximately $308 million in costs for newly diagnosed lung cancer cases in 2011.[32]

For detailed estimates of exposure to welding fumes, see the occupational exposures tab.