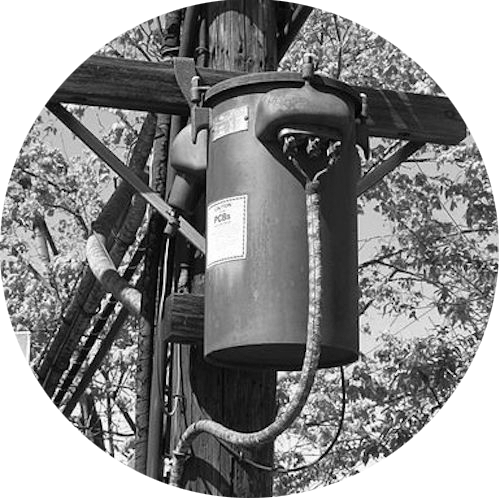 Polychlorinated biphenyls (PCBs) are a group of chemicals made up of 209 isomers.[1] Synthetic compounds, they are similar in structure but vary considerably in their physical properties.[1,2] PCBs may be oily liquids or solids that are colourless to white, depending on the exact chemical make-up.[1] They are very stable and persist in the environment.[3] Polychlorinated biphenyls may also be referred to as chlorobiphenyls, chlorinated biphenyls or Aroclor, a commercial name.[4] There are numerous other synonyms and product names; see the Hazardous Substances Data Bank (HSDB) for more information.[4]

PCBs as a group have been classified by the International Agency for Research on Cancer (IARC) as Group 1, carcinogenic to humans.[5] This classification is based on consistent associations between PCB exposure and increased risk of melanoma in humans.[5] There is also limited evidence from some studies suggesting that exposure is linked to increased risks of non-Hodgkin lymphoma and breast cancer.[5] The first PCB classified by IARC was 3,3′,4,4′,5-pentachlorobiphenyl (PCB-126); it was classified in 2012 as Group 1, based on strong mechanistic evidence for genotoxicity.[6]

PCB exposure may irritate the skin and at high levels can cause liver damage.[7] Stored in fatty tissues, PCBs can build up to concentrations far exceeding those found in the environment.[7] Little is known about the long-term health impacts of exposure to PCBs, since most observed health effects have resulted from short-term and high-level accidental or occupational exposures.[2]

mg/m3 = milligrams per cubic meter
Cl = chlorine
sk = easily absorbed through the skin
stel = short term exposure limit (15 min. maximum)
em = exposure must be reduced to the minimum
ACGIH = American Conference of Governmental Industrial Hygienists
TLV = threshold limit value
All exposure limits are defined in the legislation as chlorodiphenyl except for Ontario that defines the limit as polychlorinated biphenyls.

µg/L = micrograms per litre
µg/m3 = micrograms per cubic meter
µg/g = micrograms per gram
IMAC = interim maximum allowable concentration
*Standards are legislated and legally enforceable, while guidelines (including Ontario ambient air quality criteria) describe concentrations of contaminants in the environment (e.g. air, water) that are protective against adverse health, environmental, or aesthetic (e.g. odour) effects
**Health Canada defines archived parameter as “parameters which are no longer found in Canadian drinking water supplies at levels that could pose a risk to human health, including pesticides which are no longer registered for use in Canada, and for mixtures of contaminants that are addressed individually.”

Polychlorinated biphenyls were not included in other Canadian government guidelines, standards, or chemical listings reviewed.

The stable, relatively fire-resistant, and non-corrosive properties of PCBs have made them useful in a wide range of applications.[31] Historically, PCBs were used extensively to make industrial materials such as sealing and caulking compounds, cutting oils, inks, and paint additives.[32] They were also used to produce coolants and lubricants for certain kinds of electrical equipment, such as transformers and capacitors.[32]

According to Canadian legislation from 1980 and 1985, the only permissible use of PCBs is in older equipment, such as refrigerators, until the end of that equipment’s service life.[33,34] The maximum allowable concentration of PCBs per equipment is 50 parts per million by weight.[34] The equipment must have been designed to use PCBs at the time that it was imported, manufactured or knowingly offered for sale.[34]

In 2002, the Canadian Working Group, Great Lakes Binational Toxics Strategy, classified three major industry sectors that needed to be targeted for PCB destruction, due to high levels of PCB storage. They include provincial and municipal governments, iron and steel manufacture, and forestry, pulp, and paper industries.[36,37]

In 2008, legislative efforts concentrated on preventing further production of PCBs, contamination of the environment, and destruction of currently stored PCBs.[34] Standardized waste management procedures have been developed[38] and many companies specialize in PCB disposal.[39]

Inhalation, dermal contact, and ingestion are potential routes of exposure to PCBs for the general population.[1] All Canadians have PCBs in their bodies due to exposure to small amounts present in food, air, soil, and water.[32] The greatest source of PCB exposure for Canadians is consuming contaminated foods.[32,41]

Due to PCBs’ persistence and bioaccumulation potential, the highest concentrations are found in animals at the top of the food chain.[32] Foods found to contain high concentrations of PCBs include fish (particularly sport fish caught in contaminated lakes or rivers), meat, and poultry.[3] A survey on PCB concentrations in food, conducted in Vancouver in 2002, found that freshwater fish and marine fish carried the highest concentrations of PCBs.[42,43] A 2004 Canadian study of farmed fish found higher PCB levels in farmed versus wild salmon; however, the contaminant levels in farmed fish were still less than 1/80th of the acceptable level established by Health Canada.[44]

According to Health Canada, the average daily dietary intake of PCBs is estimated to be less than ½ a millionth of a gram.[32] Individuals who consume large amounts of fish, wildlife, or marine mammals may be exposed to higher concentrations.[32] Infants may also be exposed to PCBs through breast milk.[3] A study looking at over 300 breast milk samples collected between 1992 and 2005 across Canada found that median levels of PCBs declined significantly between 2002-2005.[45] This was at the lower end of the concentration range reported in industrialized nations.[46] CAREX Canada estimates that PCB levels in food and beverages result in an increased risk of cancer in Canada (very low data quality).

PCBs have been found in runoff, sediment, soil, rivers, creek water, lakes, leachate, pond effluents, landfills, and an underground oil-water layer.[1,47] There are no known natural sources of PCBs in the environment:[41] the widespread prevalence of PCBs in the environment is due to prior industrial use and their environmental persistence.[1] A 2007 study investigated PCB levels in Ontario rain, snow and surface waters.[48] All samples were positive for PCBs. Concentrations varied between urban and rural areas; greater concentrations were found in urban areas. However, PCBs are still found in remote areas of Canada due to long-range transport by global air currents.[32] Currently, there is insufficient measured data for CAREX Canada to produce environmental exposure estimates for PCBs in drinking water (data gap).

PCB release is not reportable to the National Pollutant Release Inventory in Canada.[49] No household products containing PCBs were listed in the Household Products Database from the United States.[50]

Inhalation, dermal absorption and ingestion are all potential routes of occupational exposure to PCBs.[1]