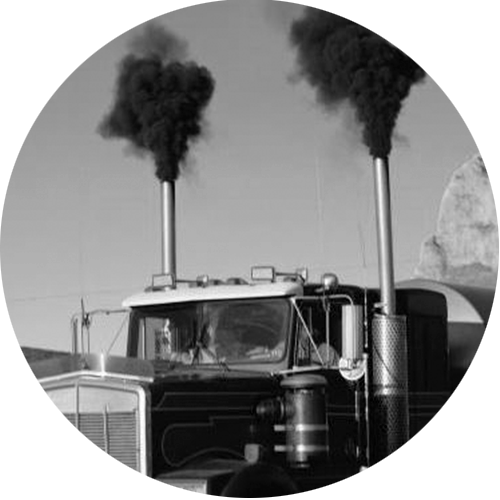 Diesel Fuel Use in Canada

Diesel engine exhaust, produced when diesel fuel combusts in a compression ignition engine, is a complex mixture of gases and particulates.[1] The composition of the exhaust depends on a number of factors including the type of engine (heavy or light duty), type of fuel and oil, speed and load of operation, and emission control systems.[1]

The International Agency for Research on Cancer (IARC) classifies diesel exhaust as Group 1, carcinogenic to humans, based on sufficient evidence for lung cancer and limited evidence for bladder cancer in humans.[4] Animal studies also showed increases in lung cancer rates from inhalation of whole engine exhaust and increases in tumour development when particulate was applied to the skin or administered internally.[2] Studies of the gaseous phase (particles removed) were inadequate to determine carcinogenicity.[2]

Although epidemiological evidence supports a link between diesel exhaust and lung cancer, exposure assessment is complex due to the difficulty in isolating diesel exposure from other ambient contaminants with similar characteristics.[2]

Short term exposure to diesel engine exhaust can irritate the eyes, throat, and bronchi, and cause neuro-physiological symptoms such as light-headedness, nausea, and respiratory symptoms.[3] Diesel exhaust may initiate allergic reactions or increase immunological response to other allergens.[3] Increases in hospital admission, higher incidence of respiratory symptoms, and decreases in lung function are all associated with exposures to airborne particulate, including diesel particulate matter.[3] Increased mortality rates are also reported, particularly in the elderly and those with cardiopulmonary conditions.[3] Children living in high traffic areas are at particular risk of respiratory symptoms.[5]

With the exception of the mining industry, few jurisdictions in Canada have an occupational exposure limit (OEL) for diesel engine exhaust, and none have adopted an OEL that reflects the current state of knowledge. OELs exist for various components of diesel engine exhaust, but there is a regulatory gap for limiting exposure to the carcinogenic fraction, which is mainly found in the particulate matter. Elemental carbon has emerged as the best surrogate for measuring diesel exhaust particulate. Several countries have proposed or adopted exposure limits for measuring elemental carbon, including Switzerland, Germany, and Austria. For more information on OELs for diesel engine exhaust in Canada, please see our our report, “Setting an Occupational Exposure Limit for Diesel Engine Exhaust in Canada: Challenges and Opportunities”.

Adopted or recommended OELs for DEE in Canada[6]

Diesel Fuel Use in Canada

Diesel fuels, produced by refining crude oils, are generally blended and often contain additives to meet specifications for performance.[14] Regulations regarding fuel composition and emission standards in Canada (aligned with the US Environmental Protection Agency) should result in lower diesel exhaust emissions across North America.[15] The regulations, which came into effect on August 31, 2006, require that the sulphur content in fuels sold for on-road use not exceed 15 ppm; fuels used for off-road, locomotive, and marine engines were required to meet the same level by 2012.[16] Lower sulphur content in the fuel leads to lower emissions of particulate matter in the exhaust.

A series of regulations outline allowable emissions for new models of on- and off-road vehicles and engines. These regulations cover applications where diesel fuels are used.[9,13] For example, the On-Road Vehicle and Engine Emission Regulation sets emission standards for particulate matter and nitrogen oxides for on-road heavy-duty truck engines from 2007 and onward. These new standards reduce emission limits by 90% and 95%, respectively, compared with previous standard levels.[15]

Emission standards are met through technological changes including catalytic converters and particle traps.[16] Although the change to ultra-low sulphur fuels will decrease sulphur emissions, significant decreases in diesel particulate matter and other diesel exhaust constituents will not be evident immediately. This is because older technology engines will remain in use until replacement is required.

The primary source of exposure to the general population is from outdoor and indoor air.[3] CAREX Canada’s environmental estimates for diesel exhaust suggest that levels in both indoor and outdoor air result in increased risks of cancer at a population level (data quality very low). Because diesel engine exhaust is not directly measured in Canada, our estimates are developed based on the assumption that 12% of total outdoor fine particles (PM2.5) are attributable to diesel engine emissions.

Data from a Health Canada assessment of respirable particulate matter estimated that over 80% of PM10 emitted from the transportation sector was attributable to diesel engines.[17] Regulating engine performance and fuel formulation has decreased exhaust emissions, however the contributions of increased numbers of vehicles, and increased use of sports utility vehicles (SUVs) in particular, are ongoing concerns.[5]

Inhalation is the most important route of occupational exposure.[1]

Additional occupations that may be exposed to diesel exhaust from the use of on-road engines include bus and subway drivers, bus garage workers, trucking company workers, forklift operators, firefighters, lumberjacks, toll-booth and parking garage attendants, traffic controllers, car mechanics, taxi drivers, couriers, and other professional drivers.[1,2] Occupations with potential for exposure to non-road diesel engines include railroad workers, underground mine workers (using diesel powered equipment), forestry (loggers), and those in the marine industry.[1,2]

With the exception of the mining industry, few jurisdictions in Canada have an occupational exposure limit (OEL) for diesel engine exhaust, and none have adopted an OEL that reflects the current state of knowledge, according to our report, “Setting an Occupational Exposure Limit for Diesel Engine Exhaust in Canada: Challenges and Opportunities”. Diesel engine exhaust contains up to 1,800 chemicals, making it a complex mixture that is challenging to monitor. However, elemental carbon has emerged as the best surrogate for measuring diesel exhaust particulate and several international jurisdictions have proposed or adopted occupational exposure limits based on measurement of elemental carbon, including Switzerland, Germany, and Austria. Current scientific evidence supports the need for a more protective occupational exposure limit (OEL) for DEE in Canada.

According to the Burden of Occupational Cancer in Canada project, occupational exposure to diesel engine exhaust leads to approximately 560 lung cancers and possibly 200 suspected bladder cancers each year in Canada, based on past exposures (1961-2001).[18,19,20] This amounts to 2.4% of lung cancer cases and 2.7% of suspected bladder cancer cases diagnosed annually. Most occupational lung cancers associated with diesel engine exhaust occur among workers in the mining and oil and gas extraction sector. These cancers also occur among workers in the transportation and warehousing, wholesale and retail trade, and manufacturing sectors. Work-related diesel engine exhaust exposure resulted in approximately $684 million in costs for newly diagnosed lung and suspected bladder cancer cases in 2011.[19]