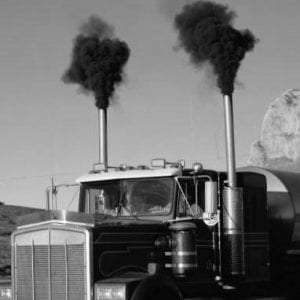 Diesel engine exhaust (DEE) is one of the most prevalent occupational exposures in Canada, with approximately 897,000 Canadians exposed at work. It is a known human carcinogen, according to the International Agency for Research on Cancer (IARC), with links to lung cancer (sufficient evidence) and bladder cancer (limited evidence). According to the Burden of Occupational Cancer Study, workplace DEE exposure is responsible for approximately 560 lung cancers and possibly 200 suspected bladder cancers, with new diagnoses costing approximately $684 million per year.

Current scientific evidence supports the need for a more protective occupational exposure limit (OEL) for DEE in Canada. In order to better understand the regulatory landscape for occupational DEE exposure in Canada and identify key barriers and facilitators to setting and complying with OELs, our team conducted interviews with key informants and an environmental scan of OELs for DEE. The results are presented in the new report, “Setting an Occupational Exposure Limit for Diesel Engine Exhaust in Canada: Challenges and Opportunities”.

With the exception of the mining industry, our results show that few jurisdictions in Canada have an OEL for DEE, and none have adopted an OEL that reflects the current state of knowledge. OELs exist for various components of DEE (e.g., carbon monoxide, oxides of nitrogen), but there is a regulatory gap for limiting exposure to the carcinogenic fraction, which is mainly found in the particulate matter.

Table 1: Adopted or recommended OELs for DEE in Canada

Diesel engine exhaust contains up to 1,800 chemicals, making it a complex mixture that is challenging to monitor. However, elemental carbon has emerged as the best surrogate for measuring diesel exhaust particulate and several international jurisdictions have proposed or adopted OELs based on measurement of elemental carbon, including Switzerland, Germany, and Austria (see report for more details).

The interviewees identified several key challenges to developing and implementing a DEE OEL, including:

Most jurisdictions in Canada set OELs based on the American Conference of Governmental Industrial Hygienists (ACGIH®) Threshold Limit Values (TLVs), which has not yet issued a recommendation for DEE. The absence of an ACGIH® recommendation on DEE appears to be one of the principal reasons why there is currently no OEL for DEE in Canada.

The key facilitators to developing and implementing an OEL for DEE the interviewees identified include:

The findings of the environmental scan indicate a trend towards the adoption and implementation of more protective OELs for DEE. Based on evidence of increased lung cancer risk at very low levels, we recommend that Canadian jurisdictions move towards an OEL based on elemental carbon of 20 µg/m3 for the mining industry* and 5 µg/m3 for other workplaces to protect worker health.

For more information, the full report is available here. Our commentary that features this work, titled “Canada Should Move Toward Adopting Harmonized Evidence-Based OELs to Consistently and Adequately Protect Workers”, is available here.

*The higher OEL recommended for the mining industry takes into account the feasibility of implementation in this industry that will have particular challenges and is meant as a interim target in a staged approach to eventually have one harmonized OEL for all workers.