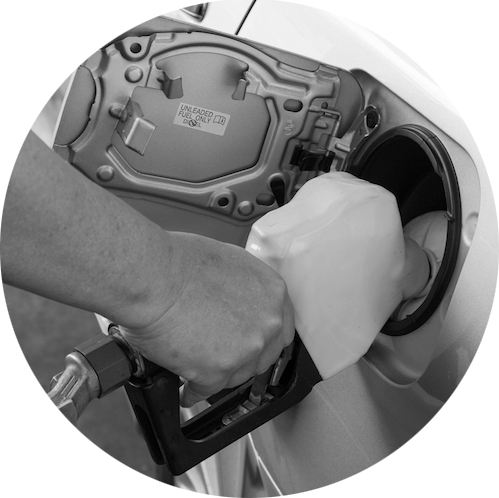 OTHERS – POSSIBLE CARCINOGEN (IARC 2B)

Gasoline is a colourless, pale brown, or pink volatile liquid that is produced by refining crude petroleum oils.[1] It is a complex mixture of more than 150 chemicals, including mostly hydrocarbons and paraffins, and small amounts of toluene, xylene, ethylbenzene, and benzene.[1] Trace amounts of additives can also be found in gasoline, such as antiknock compounds, anti-icing and anti-rust agents, and metal deactivators.[1] Gasoline’s chemical composition depends on factors such as source of the crude petroleum, manufacturer, and time of year.[1] Gasoline may also be referred to as automotive gasoline, petrol or gas.[2] See Hazardous Substances Data Bank (HSDB) for more synonyms and product names.[3] CAREX Canada has also produced a profile on Gasoline Engine Exhaust, since it was separately considered by The International Agency for Research on Cancer (IARC).

Gasoline has been classified by the International Agency for Research on Cancer (IARC) as Group 2B, possibly carcinogenic to humans.[4] Some epidemiological studies found elevated risks of cancer at these sites following occupational exposure: pancreas, kidneys, stomach, bladder, testicles, liver, and lymphatic and haematopoietic systems.[4] However, few studies provided sufficient data to identify a dose-response relationship between gasoline exposure and cancer outcome.[4]

There is limited evidence for the carcinogenicity of gasoline in experimental animals. One study found an increased incidence of skin tumours in mice exposed to naphtha, a crude petroleum distillate similar to gasoline.[4] Inhalation studies in mice and rats exposed to gasoline have produced inconsistent results.[4]

Gasoline exposure can cause other harmful effects, usually due to individual chemicals in the gasoline mixture, such as benzene and lead.[1] Health effects include respiratory tract, stomach, and skin irritation as a result of inhalation, ingestion, and handling, respectively.[1] Inhaling gasoline vapours or ingesting large amounts of gasoline may result in acute nervous system effects such as cardiac arrhythmias, dizziness, headaches, coma, respiratory arrest, and death.[1] Chronic exposures may also result in neurologic, developmental, and genotoxic effects.[1]

Gasoline was not listed in available environmental guidelines for Canadian Drinking Water Quality (due to its complexity) or Residential Indoor Air Quality.[20,21]

Gasoline was not included in the Canadian Environmental Protection Act (CEPA) List of Toxic Substances.[24]

Gasoline is used primarily as fuel for internal combustion engines.[1]

Gasoline may also be used to extract or dilute essential oils, as a solvent for rubber adhesives, as a detergent for precision instruments, and as a finishing agent for artificial leathers.[3]

Canadians are one of the top consumers of gasoline per capita. In 2011, Canada ranked second in per capita usage of gasoline, using 886 kg/person per year.[26] The general population’s main exposure to gasoline occurs by inhaling gasoline vapours when refuelling automobiles and refuelling or using other gasoline-powered equipment, such as lawnmowers.[1] Exposure may also occur via close proximity to gasoline spills (i.e. off-gassing from soils, or use of contaminated water); after a gasoline spill or leak, some chemical components evaporate, whereas others may dissolve and contaminate groundwater and soil.[1]

Leaking gasoline storage tanks contribute to groundwater contamination in Canada.[27] Corroding underground gasoline tanks, which were installed in large numbers in the 1950s and 1960s, have resulted in an increasing number of leaks in recent decades.[27] This is an issue of particular importance in Atlantic Canada, where groundwater is widely used for drinking via wells.[27]

Exposure to gasoline components may occur by consuming contaminated water. However, most chemicals found in gasoline are removed by municipal drinking water treatment procedures.[1]

When used as a fuel, gasoline produces a number of chemicals that are emitted in engine exhaust. Some of the gasoline used by engines may also vaporize into the air without undergoing combustion.[28]

Since 1990, Canada has prohibited the production, import, and sale of leaded gasoline to minimize the risks of lead exposure from gasoline.[29] Exemptions to this regulation include the use of lead in gasoline for competition vehicles, aviation, farm equipment, boats, and trucks weighing >3,856 kg.[29] Information on lead exposure is available through the carcinogen profile on Lead published by CAREX.

Gasoline is not reportable to the National Pollutant Release Inventory (NPRI) in Canada.[30]

One household product, gasoline itself, is listed in the US Household Products Database.[31]

Inhalation is the major route of exposure to gasoline, though exposure through ingestion and dermal contact can also occur.[1]

Occupational exposure to gasoline vapours may occur while producing, transporting, or distributing gasoline.[4]

Those at an increased risk of exposure to gasoline vapors include service station attendants, gasoline tank truck drivers, workers at bulk loading terminals and marine loading docks, workers who remove and service underground storage tanks and gasoline pipelines, workers who clean up gasoline spills and leaks, and refinery workers.[1]

CAREX Canada has not prioritized gasoline for exposure estimate development. This is because there is a lack of exposure monitoring data in the Canadian Workplace Exposure Database on which to base an estimate