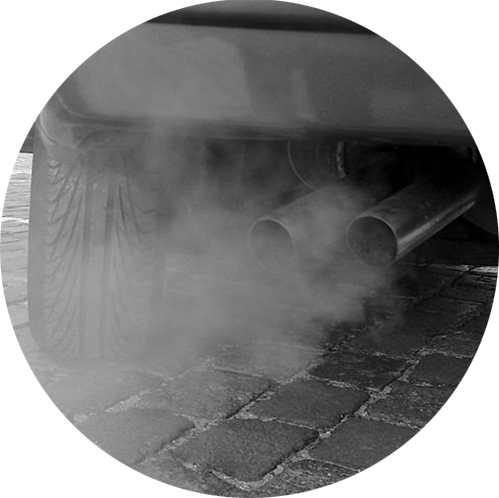 OTHERS – POSSIBLE CARCINOGEN (IARC 2B)

Gasoline Fuel Use in Canada

Short-term exposure to gasoline engine exhaust may irritate the eyes, nose, or throat, aggravate existing respiratory allergies, and lead to headache, light-headedness, or tingling extremities.[5] Long-term health effects have been assessed through epidemiological studies examining proximity to road traffic. The associated long-term health effects include increased illnesses related to respiration and aggravated asthma in children, decreased cardiovascular health, and worsened symptoms in those with existing heart and lung conditions.[6]

The Canadian Environmental Protection Act (CEPA) outlines a number of regulations that influence gasoline engine exhaust emissions. They include:

Gasoline Fuel Use in Canada

Gasoline engines are used in cars, power generators, and hand-held equipment such as chainsaws and leaf blowers.[1]

On average, 60% of gasoline consumption in Canada occurs in Ontario and Quebec, 32% in the western provinces, and 8% in the Atlantic provinces and territories.[15] In 2014, approximately 43.4 billion litres of gasoline were sold for road motor vehicles in Canada.[16]

Regulations regarding fuel composition and emission standards in Canada (aligned with the US Environmental Protection Agency) should result in lower gasoline exhaust emissions across North America.[17] The Sulphur in Gasoline Regulation, for example, requires that sulphur content be lowered gradually to a level of 10 ppm by January 2020.[14] Lower sulphur content in the fuel leads to lower emissions of particulate matter in the exhaust. Furthermore, numerous regulations have been developed – and others are under review – that outline allowable emissions for new models of on- and off-road vehicles and engines.[8,11,12]

Exposure to gasoline engine exhaust in the general population increases with proximity to traffic.[1] In calm conditions, emissions accumulate near roadways; concentrations of carbon monoxide, metals, and particulate matter decline sharply approximately 300 metres from the road.[18] Children who live in homes or go to schools that are located downwind from major highways are more likely to be exposed to gasoline engine exhaust.[1] Traffic emissions can infiltrate buildings; for example, vehicle emissions can constitute 24-47% of indoor ultrafine particle mass.[19] In addition, individuals are more likely to be exposed if walking or cycling by the roadside and in high traffic conditions.[1]

Because Canadians spend close to 90% of their day indoors, exposure in indoor environments is an important consideration.[1,20] Factors that influence indoor gasoline engine exhaust concentrations include the air exchange rate in the building and whether it has an attached garage.[1] Greater rates of air exchange mean there is a greater influx of air from the outdoors, which leads to greater contributions of outdoor sources to indoor environments.[1] Having an attached garage can lead to increased exposure since contaminants can more readily enter the house.[21] For example, in Canada, benzene levels are three times higher in homes with attached garages compared to those with detached or no garages. The presence of benzene is attributable to engine exhaust, as well as to the evaporation of benzene from gasoline.[21]

Lastly, time spent in vehicles contributes a large proportion of total exposure to gasoline engine exhaust in adults.[22] Higher emissions are reported on arterial roads, where there is constant stopping and acceleration due to traffic lights. This is because fast acceleration increases the amount of exhaust produced.[22]

Inhalation is the primary route of occupational exposure to gasoline engine exhaust.[1]