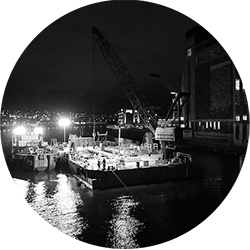 OTHERS – PROBABLE CARCINOGEN (IARC 2A)

Shift work can be defined as the organization of working time by different teams in succession to cover more than the usual eight hour work day, up to a 24 hour period.[1] Some people work shifts on rotation while others perform regularly scheduled day, evening, or night shifts.[1]

The International Agency for Research on Cancer (IARC) has classified night shift work as Group 2A, probably carcinogenic to humans, based on sufficient evidence of cancer in animals and limited evidence in humans.[6]  In several well-designed animal studies, alteration of rodents’ light-dark schedules (e.g. exposure to repeated 8 hour time shifts in the light-dark schedule, or exposure to a stable 12 hour light and 12 hour dark schedule) lead to increased rates of cancer or tumours [6]. Epidemiological studies observed an increased risk of breast cancer among those working high-intensity shifts over long durations compared to those who do not work at night. However, findings were inconsistent across studies. Some studies considered in the IARC review suggest that prostate and colorectal cancer may also be associated with night shift work.[6] The findings from the epidemiological studies are somewhat limited by factors such as potential confounding and inconsistent definitions of shift work.[6] The Group 2A classification was further supported by strong mechanistic evidence that alteration of light-dark schedule among rodents leads to immunosuppression, chronic inflammation, and cell proliferation, all of which may contribute to cancer growth[6].

In addition to potentially carcinogenic outcomes, night shift work has been associated with changes in mental and physical performance at work, as well as fatigue, stress, disruption to family and social life, depression, and anxiety.[1,7,8] Digestive disorders such as indigestion, heartburn, nausea and loss of appetite, and cardiovascular disorders such as hypertension have been observed in night shift workers.[9] Night shift work has also been linked to reproductive health problems in women and aggravation of previous health conditions such as asthma, diabetes, and epilepsy.[8]

CAREX Canada estimates that approximately 1.8 million Canadians work shifts between midnight and 5am. This represents around 12% of working Canadians. Industries with the most workers working at night include trades, health care and social assistance, manufacturing, and accommodation and food services.