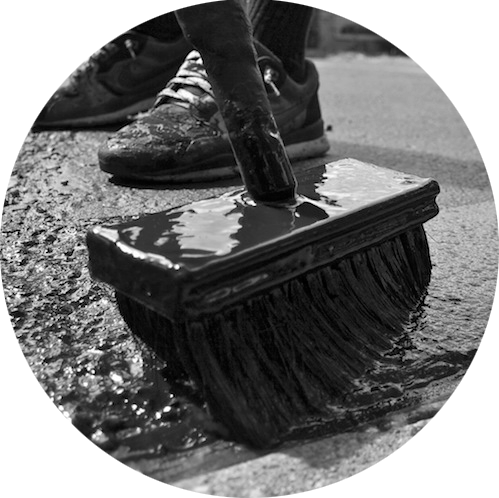 Coal tar is produced as a byproduct when coal is carbonized to make coke or gas. When distilled, coal tar produces creosotes as a product and coal-tar pitch as a residue.[1] Coal tars are viscous and slightly soluble in water, while coal-tar pitches can be semi-solid to solid.[2] Coal tars and coal-tar pitches are complex mixtures containing over 400 identified substances including hydrocarbons, phenols, and heterocyclic compounds.[1] They have many uses industrially and in consumer products. Coal-tar pitch volatiles (CTPVs), which contain varying concentrations of polycyclic aromatic hydrocarbons (PAHs), are released when coal-tar pitch is heated.[3] Creosotes are oily liquids used extensively in wood preservation; please consult the separate Creosotes profile for more information on this substance. Other substances related to coal tar and coal-tar pitches that are also considered by CAREX Canada include Bitumens, Benzene, and Naphthalene.

Coal tar and coal-tar pitches have been classified by the International Agency for Research on Cancer (IARC) as Group 1, carcinogenic to humans, with an established link to skin cancer and scrotal cancer.[4] The 2012 IARC review of Group 1 substances reaffirmed this classification,[5] citing sufficient evidence in humans for a causal relationship between exposure to coal-tar pitch in paving and roofing and lung cancer. This review also cited limited evidence in humans for bladder cancer.[5] Coke production and coal gasification were also classified as Group 1, based on lung cancer outcomes.[5] There is additional evidence linking coal tar and coal-tar pitches to kidney, bladder, and digestive tract cancers, and leukemia.[1]

Coal tar was not included in other Canadian government guidelines, standards, or chemical listings reviewed.

The majority of coal tar is distilled to produce refined products, including creosote, coal-tar pitch, crude naphthalene, and anthracene oils.[1] Because of its high availability and heating value, some crude coal tar is used as fuel for blast furnaces in the steel industry.[5] Coal tar also has a long history of use in pharmaceutical products to treat skin conditions, including eczema, psoriasis, and dandruff. It is also used in denatured alcohol.[5]

Coal-tar pitches have primarily been used as binders in aluminum smelting electrodes.[3] They are also used in roofing materials, surface coatings and pavement sealants, as well as for pitch coke production.[3,26]

In 2015, Canadian mines produced 62 million tonnes of coal, a 10% decrease from 2014. Most of the decline is attributable to a weak global demand for metallurgical coal.[27]

The amount of coal tar and coal-tar pitch produced from coal was not identified. Because coal tar is a byproduct, metallurgical use – i.e. coking for the steel industry – was the second largest use.[28] Ontario is the main provincial consumer of coal for coke production.[28]

Inhalation, dermal contact, and ingestion are all potential routes of exposure for the general public.[1]

Common exposure sources include pharmaceutical products (lotions and ointments) used to treat skin disorders such as psoriasis, and shampoos used for dandruff.[1] In Canada, anti-dandruff products are classified as drugs if they contain coal tar at concentrations of 0.5-10%.[31] Coal tar in these products are prepared by mixing coal tar with alcohol, polysorbate and washed sand, resulting in a filtered and diluted solution. Thus, the composition of coal tar in these products differs from industrial uses of coal tar.[26]

Coal tar-based pavement sealants, which are primarily used in residential driveways and small commercial or residential parking lots, are another potential source of exposure.[26] Levels of coal tar in soils and dusts adjacent to the sealed lots were higher compared to those adjacent to non-sealed lots.[26] Dermal exposure may occur when applying the sealant to the driveway.[26]

Living near factories or plants that use coal tar or coal-tar pitches is a potential source of exposure.[32] A total of 25 former coal tar/creosote production sites in Ontario were recently tested and had a persistent occurrence of subsurface coal tar.[2] Most of the sites had not been actively engaged in production for over 35 years.[2] In 1999, the city of Kingston, Ontario undertook a large clean up of its former coal gasification site which ran until the late 1950s. Large quantities of soil and groundwater contaminated with coal tar were removed to prevent further exposures to the public; not all of the contamination could be removed.[33]

Some components of coal tar and coal-tar pitch bioaccumulate in aquatic species.[3] In particular, polycyclic aromatic hydrocarbons (PAHs) accumulate to greater extents than the other components, with bioconcentration factors exceeding 5,000 for certain substances.[26]

Inhalation and dermal contact are the most important routes of occupational exposure.[2]

CAREX Canada estimates that approximately 7,300 Canadian workers are exposed to coal tar and coal-tar pitches in their workplace. Among Canadian industries, the largest exposed groups are highway, street, and bridge construction; aluminum production and processing; petroleum and coal product manufacturing, and foundries. The largest exposed occupational groups are roofers and shinglers, followed by construction trades helpers and labourers, heavy equipment operators, and machine operators in mineral and metal processing.

Other industries with potential for occupational exposure to coal tar and coal-tar pitch include those associated with coke production, coal gasification, steel foundries, and installation of electrical equipment.[1,2] Exposure may also occur when producing or using refractory bricks, paints, enamels, or coatings.[1]