Inhalation is the most important route of exposure, however dermal contact may also lead to skin-related health outcomes, such as dermatitis.[1,2]

The largest occupational group exposed to wood dust are carpenters. Other important occupations likely exposed are cabinetmakers, carpentry trades contractors and supervisors, and labourers in wood, pulp, and paper processing.

Wood dust exposures have decreased significantly over the past few decades. Furniture and cabinetry shops are generally thought to have the highest exposures, particularly during sanding and finishing work, when the finest particles are generated.[3,4] Higher exposures have been measured in plywood and particleboard mills, where wood is sawn and sanded, and near chippers, saws, and planers in sawmills and planer mills.[3]

A study in a British Columbia lumber mill also found high exposures during tasks such as sawdust clean-up, planing kiln-dried lumber, and driving mobile equipment in the yard.[5]

The number of workers exposed to wood dust decreased by approximately 34,000 workers from 2006 to 2016 (a 10% decrease). This was driven by a decrease in the total number of loggers, sawmills, related operators, cabinentmakers, and carpenters.

Workers exposed to wood dust by industry in 2016 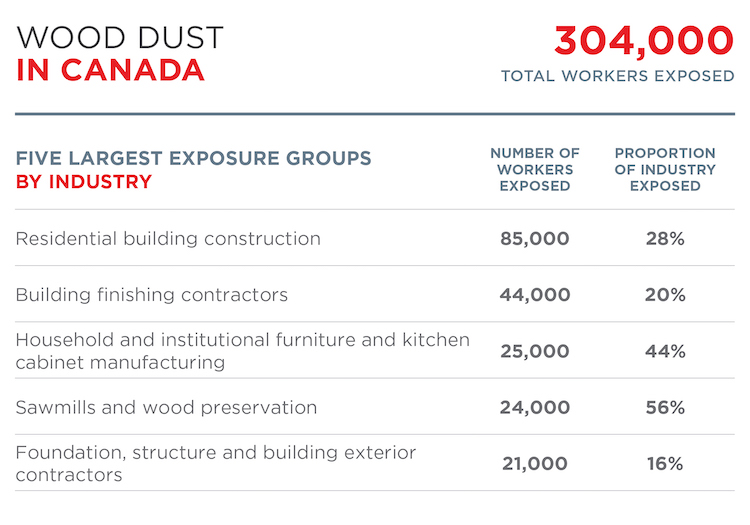 Workers exposed to wood dust by region in 2016

Workers exposed to wood dust by exposure level in 2016

The table below shows the number of workers exposed by industry group and level of exposure to wood dust. These results highlight industries with the most number of workers, as well as industries with the highest levels of exposure. For example, in wood-based industries, such as wood product manufacturing and furniture manufacturing, the majority of exposed workers fall into the highest exposure category. However, in building construction, the largest industrial group, the majority of exposed workers are in the moderate exposure category. Depending on the goals of a prevention campaign, exposure reduction in the large industrial group might be a useful strategy, or reducing exposure to those at highest risk of exposure could be seen as a priority.

Data used in developing the occupational estimates for wood dust were collected from several sources:

CAREX defines exposure to wood dust as inhalation exposure above levels expected in the general environment (exceptions may be those who often pursue hobby carpentry at home).

To determine the number of workers potentially exposed to wood dust at work, CAREX occupational exposure experts used methods previously established in other peer-reviewed CAREX projects in Europe. A series of steps were taken to assign exposure proportions to occupations and industries at risk of exposure to wood dust.

CAREX uses available workplace exposure measurements in the CWED to create exposure level categories by industry and occupation. For wood dust, these categories are:

A group of workers is put in this exposure category if both these criteria are met: