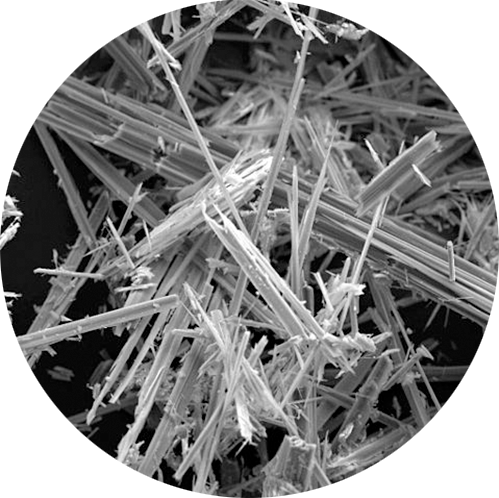 Asbestos is the general term for a group of naturally occurring, fibrous silicate minerals.[1] The most abundant form is chrysotile, which is found in bundles of fibres that can exceed 10 cm in length. Chrysotile is the only serpentine variety. The five amphibole varieties include amosite, crocidolite, actinolite, tremolite, and anthophyllite. Asbestos has been widely used in commercial applications because of its heat resistance, tensile strength, insulating and friction characteristics, as well as its ability to be woven.[1]

Asbestos is released into the environment by natural and anthropogenic sources.[2] The ability of asbestos fibres to enter and deposit in the lungs depends on their length, diameter, and chemical composition. These factors also influence the body’s ability to clear the fibres. Thin fibers (≥8 μm long with a diameter ≤1.5 μm) have the greatest potential to enter the lungs and are the most potent carcinogens.[1]

Asbestos has been classified by IARC as Group 1, carcinogenic to humans, with well established links to pleural and peritoneal mesotheliomas, and to lung cancer. IARC’s review of Group 1 carcinogens in 2012 reaffirmed this classification, and also found “sufficient evidence in humans” for ovarian cancer, and “limited evidence in humans” for colorectal, pharynx, and stomach cancers.[3] People who smoke and are exposed to asbestos have an even higher risk of lung cancer.[1] Research also reports increases in laryngeal and some other cancers with this combination of exposures, although the strength of association varies.[4]

Asbestosis, a serious disease characterized by scar tissue in the lungs and in the pleural membrane, is caused by exposure to high concentrations of asbestos. Symptoms include difficulty breathing, coughing, and in severe cases heart enlargement, disability, and death.[2]

In 2018, the Prohibition of Asbestos and Products Containing Asbestos Regulations came into force.[5] This regulation prohibits the import, sale and use of asbestos, as well as the manufacture, import, sale and use of products containing asbestos. The regulations do not apply to mining residues, except for in high risk activities. A number of exemptions were made, including, but not limited to, the import, sale, or use of products containing asbestos to service equipment in nuclear facilities until 2022 and the import and use of asbestos for chlor-alkali facilities until 2029.

Asbestos was not included in other Canadian government guidelines, standards, or chemical listings reviewed.

Chrysotile has always been the most important asbestos fibre used commercially. Amosite, crocidolite, and actinolite were also used in commercial products, while tremolite and anthophyllite were typically encountered as contaminants.[1]

Consumption of unmanufactured asbestos fiber in the United States was 343 t in 2015, down by 16% from 406 t in 2014. The chloralkali industry, which uses asbestos to manufacture semi-permeable diaphragms accounted for an estimated 95% of domestic asbestos consumption during 2015.[31]

Prior to the closure of two Canadian asbestos mines in 2011,[32] Canada was a major producer and exporter of asbestos. Approximately 410,000 tonnes of asbestos was produced in Canada between 2008 and 2010, accounting for roughly 6% of total global production in the same period.[33] Trade data from 2015 shows that Canada still imports some manufactured goods including friction materials, tubes and pipes, corrugated sheets and panels, paper, millboard, clothing, and other chrysotile based materials.[34]

In the environment, the primary route of exposure is by inhaling air contaminated with asbestos. People may be exposed to higher-than-average levels of asbestos in air if they use asbestos-containing products, or live or work in buildings with deteriorating asbestos insulation or that have undergone poorly performed asbestos removal.[2] People may also be exposed during home renovations if asbestos containing materials are disturbed. Asbestos was used in over 3,000 different building materials used from the 1950s to 1990s such as stucco, flooring, roof shingles, and insulation.[36,37] Family members of asbestos workers may also be exposed through contaminated work clothing.[38] CAREX Canada estimates that asbestos levels in indoor and outdoor air may result in increased risks of cancer at a population level (very low data quality).

Vermiculite insulation produced between the 1920s and 1990s and used in homes may contain amphibole asbestos and could be an exposure hazard if disturbed.[39] Vermiculite products marketed for garden use may also contain asbestos. An EPA study in the Seattle area in 2000 found 5 of 16 purchased products were contaminated with asbestos.[40]

Although contaminated air is the most important route of exposure in the general population, people may also be exposed by ingesting drinking water in areas where asbestos occurs (either naturally or from human activities). There is a great deal of debate on the carcinogenic role (if any) of exposure to asbestos via drinking water. In general, there is no consistent evidence to support this hypothesis.[1,41] CAREX Canada estimates that exposure to asbestos via drinking water or food and beverages is negligible.

Asbestos is geologically related to talc, a substance that may be used in cosmetics and pharmaceuticals, and as a food additive. Talc from some mine deposits can be contaminated with asbestos, especially anthophyllite and tremolite.[1] When used as a food additive, talc must be asbestos free, as per the Food and Drug Regulations.[42] The Prohibition of Asbestos and Products Containing Asbestos Regulations prohibits asbestos above trace levels in consumer products, including cosmetics.[43] However, the responsibility of testing lies with the manufacturers.

Searches of Environment Canada’s National Pollutant Release Inventory (NPRI) and the US Household Products Database yielded the following results on current potential for exposure to asbestos in Canada:

For more information, see the environmental exposure estimate for asbestos.

Inhalation is the most important route of occupational exposure to asbestos.[1]

Current asbestos-related disease is associated with exposures that occurred 10 to 40 years ago. This is due to the latency period between exposure and onset of disease. Exposure sources at that time included manufactured products and buildings containing asbestos, as well as the act of mining and milling asbestos. Exposure today tends to involve contact with older asbestos-containing products, which is referred to as secondary exposure.

Exposure in construction workers is difficult to monitor due to the wide variety of worksites and the transient nature of employment for many workers. Despite this, the INSPQ in Quebec released a report on exposures to asbestos in the construction industry.[46]

According to the Burden of Occupational Cancer in Canada project, occupational exposure to asbestos leads to approximately 1,900 lung cancers and 430 mesotheliomas each year, based on past exposures (1961-2001).[47,48] This amounts to 8% of all lung cancers and 81% of all mesotheliomas diagnosed annually (almost all of the remaining mesotheliomas are likely due to environmental asbestos exposure). Most asbestos-related cancers occur among workers in the manufacturing and construction sectors. Work-related asbestos exposure resulted in approximately $2.35 billion in costs for newly diagnosed lung cancer and mesothelioma cases in 2011.[49]

For detailed estimates of exposure to asbestos, see the occupational exposures tab.