Inhalation is the most important route of occupational exposure to asbestos.[1] CAREX Canada estimates that approximately 235,000 Canadians are exposed to asbestos in their workplace. Current asbestos-related disease is associated with exposures that occurred 10 to 40 years ago. This is due to the latency period between exposure and onset of disease. The exposure sources were very different at that time than they are now.

Exposure from more widespread mining and milling, in addition to primary use of asbestos in manufactured products and buildings was most important in the past. According to the Burden of Occupational Cancer in Canada project, past exposures (1961-2001) to asbestos leads to approximately 1,900 lung cancers and 430 mesotheliomas each year [2,3]. This amounts to 8% of all lung cancers and 81% of all mesotheliomas diagnosed annually (almost all of the remaining mesotheliomas are likely due to environmental asbestos exposure). Most asbestos-related cancers occur among workers in the manufacturing and construction sectors. Work-related asbestos exposure resulted in approximately $2.35 billion in costs for newly diagnosed lung cancer and mesothelioma cases in 2011[4].

In contrast, the vast majority of exposure that occurs today is due to contact with older asbestos-containing products, and doing renovation work on buildings and in industrial plants. These exposures can be considered as a kind of secondary exposure from contact with those products and building materials that were made or put in place more than 35 years ago.

Many of the workers currently expected to be exposed work in the construction sector, where exposure occurs from poor exposure control during renovation and refurbishing of old buildings. Exposure in construction workers is difficult to monitor due to the wide variety of worksites and the transient nature of employment for many workers. Despite this, the INSPQ in Quebec released a report on exposures to asbestos in the construction industry.[5]

In addition, exposure may commonly occur among maintenance workers in industries where substantial amounts of asbestos were used in the past (such as smelting, petroleum refining and pulp and paper), as well as automotive brake repair workers, and people that repair and maintain ships.

In some cases, we expect to see exposure today in the same or similar occupational groups as we did in the 1970s (i.e. construction workers, plumbers and pipefitters), albeit at lower exposure levels. In other cases, such as in mining, exposure has been almost completely phased out. Further, the abatement and asbestos remediation industry is an entire category of business with potential for exposure to asbestos that did not exist as a separate profession until the early 1980s.

Using an approach that considered historical uses of exposure in Canada to guide exposure assessments for the present day, results indicate that approximately 235,000 Canadians are currently exposed to asbestos in their workplaces, and are primarily male (89%). This estimate includes people with the potential for exposure at work to any form of asbestos likely to exceed the non-occupational background level in dwellings or urban air (usually below 0.001 f/cm3).

The largest industrial groups exposed are construction-related (specialty trades and building construction contribute about 67% of all exposed workers). Other important industries include public administration, schools, and hospitals.

Workers exposed to asbestos by industry in 2016 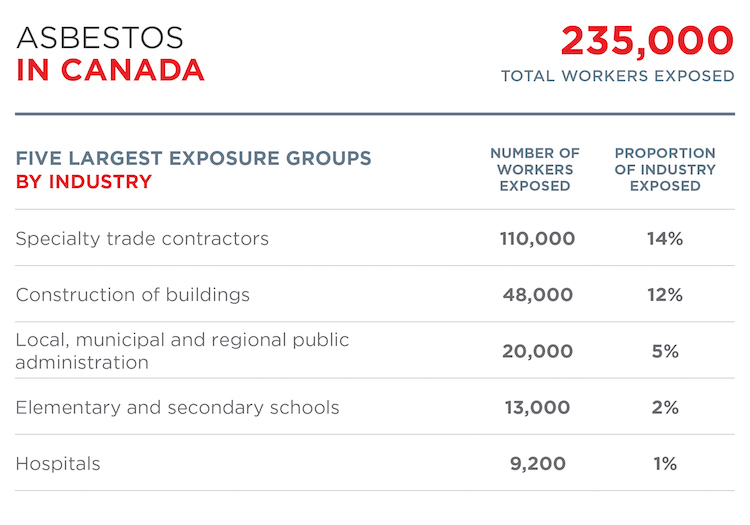 Workers exposed to asbestos by region in 2016

In total, approximately 235,000 Canadians are exposed to asbestos in their workplaces. The majority of workers exposed to asbestos are in the low and moderate exposure categories. A significant number of asbestos-exposed workers are at risk for high exposure.

Workers exposed to asbestos by exposure level in 2016

Identifying industries with either 1) workers exposed to high levels of asbestos or 2) a larger number of workers exposed to asbestos is important in guiding cancer prevention efforts to prioritize exposed groups and target resources most effectively.

Workers exposed to asbestos by exposure level and industry in 2016

Data used in developing the occupational estimates for asbestos were collected from several sources:

To determine the number of workers potentially exposed to asbestos at work, CAREX occupational exposure experts used methods previously established in other peer-reviewed CAREX projects in Europe. A series of steps were taken to assign exposure proportions to occupations and industries at risk of exposure to asbestos.