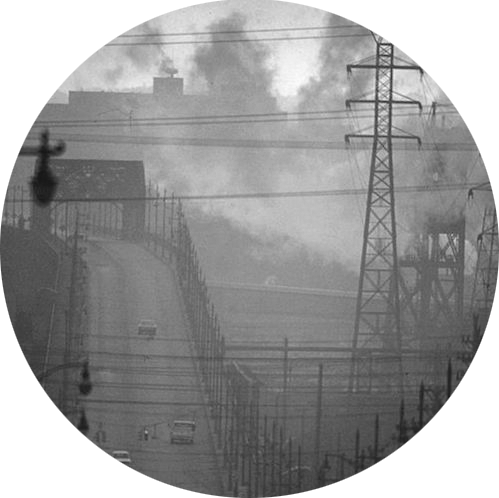 The composition of outdoor air pollutants may vary considerably over time and space due to variations in the pollutants’ sources, as well as changes in weather and atmospheric transformations.[2] Major gaseous pollutants include sulfur dioxide, nitrogen oxides, and carbon monoxide. Major particulate matter components include organic and elemental carbon compounds, metal oxides, lead, and others.[2] The overall composition of outdoor air pollution in an environment is difficult to characterize due to the numerous pollutants that comprise it. However, particulate matter is typically classified according to its size. Suspended particulates tend to be less than 40 µm in diameter.[3] Particulates may be referred to as PM10 (all particles sized 10 µm or less), PM2.5 (all particles sized 2.5 µm or less), or TPM (total particulate matter).[4] Particulates can also be broken down into four main categories:

Each category of particles originates from different sources and interacts uniquely in the environment. For example, ultrafine particles are formed directly in combustion exhaust, mainly as hot vapours are condensed,[3] and can aggregate and coagulate over time to form fine particulates.[4] In contrast, particles in the fine fraction are produced mainly by combustion processes and by atmospheric reactions between precursor gases such as sulphur dioxide, nitrogen oxides, ammonia, and some volatile organic compounds.[3,4]

Outdoor air pollution is not regulated as an occupational exposure.

µg/m3 = micrograms per cubic metre
(a) Reference Level is defined as the level above which effects on human health and the environment can be demonstrated[12]
(b) Interim AAQC provided as a guide for decision making
(c) Attainment based on average of 98th percentile ambient measurement over 3 consecutive years[13]
(d) Achievement based on annual 98th percentile value
(e) The 3-year average of the annual average concentrations[13]
US EPA = United States Environmental Protection Agency
(f) Not to be exceeded more than once per year on average over three years
(g) To attain this standard, the 3-year average of the 98th percentile of 24-hour concentrations at each population-oriented monitor within an area must not exceed 35 µg/m3 (effective December 17, 2006)
(h) To attain this standard, the 3-year average of the weighted annual mean PM2.5 concentrations from single or multiple community-oriented monitors must not exceed 15 µg/m3
WHO = World Health Organization

CAREX Canada estimates of potential lifetime excess cancer risk for outdoor air pollution are unavailable at this time. According to the Canadian Population Attributable Risk of Cancer (ComPARe) study, 6.9%, or 1,700 lung cancer cases were due to exposure to PM2.5 in outdoor air in 2015[15]. The study estimates that over 3,000 lung cancer cases could be prevented between 2016 and 2042 if declining trends in PM2.5 continue.

Particulates in outdoor air are monitored by the National Air Pollution Surveillance (NAPS) network. In 2013, the annual average levels of PM2.5 was 7.3 µg/m3, and the annual peak 24-hour concentration was 20 µg/m3. Both of these values remained below the 2015 Canada Wide Standard.[14] Between 1985 and 2012, daily averages for PM10 remained below 10 µg/m3 in 44 of 49 different sites located across Canada. Higher levels of PM10 were found in large urban areas and near roadways.[16]