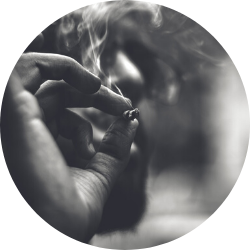 OTHERS – PROBABLE CARCINOGEN (IARC 2A)

Acrolein is a highly reactive and volatile clear or yellow flammable liquid.[1] It is a chemical synthesized for use as a pesticide in Canada, and is also created and released during natural processes (e.g. during forest fires, photo-oxidation of compounds in the air, fermentation, and within the body) and through human-driven activities (e.g. during the combustion of organic materials including fuels, high temperature cooking, smoking, and during chemical manufacturing).[2,3,4,5] Acrolein may also be referred to as acrylaldehyde and 2-propenal. There are numerous other synonyms and product names; see the Hazardous Substances Data Bank for more information.[6]

In 2020, acrolein was classified by the International Agency for Research on Cancer as probably carcinogenic to humans (Group 2A).[7] This decision was based on sufficient evidence of the carcinogenicity of acrolein in two rodent species (mice and rats), and strong evidence that acrolein shows many key characteristics of carcinogens.[7,8]

*Standards are legislated and legally enforceable, while guidelines (including Ontario ambient air quality criteria) describe concentrations of contaminants in the environment (e.g. air, water) that are protective against adverse health, environmental, or aesthetic (e.g. odour) effects
†For the protection of respiratory epithelial lesions

Acrolein was not included in other Canadian government guidelines, standards, or chemical listings reviewed.

In Canada, acrolein is primarily used as a pesticide to control weeds and algae in irrigation canals and to control bacteria and fungi in water injection systems during crude oil extraction.[4] There are currently three acrolein products registered in Canada under the Pest Control Products Act: a technical grade active ingredient, a commercial class product, and a restricted class end-use product.[34] In 2018, 25,000-100,000 kg of acrolein active ingredient were sold in 2018 in Canada for pest management purposes.[35] Acrolein is also used in Canada by oil companies in closed systems to scavenge poisonous hydrogen sulphide from fluids, and to a lesser extent, by laboratories.[4]

Outside of Canada, acrolein has been used to synthesize other chemicals (e.g. acrylic acid), to manufacture an animal feed supplement, and to make chemical weapons.[3,5] Due to its pungent odour, it is also used as a warning agent in methyl chloride refrigerants.[5]

Acrolein is not commercially produced in Canada. [4] It is imported primarily from the United States. In 1994 and 1997, acrolein was present in some hazardous wastes imported into Canada (2 kg). [4]

Environmental exposure to acrolein primarily takes place by inhalation, and is highest in those who smoke or are exposed to second-hand smoke.[37]

Acrolein concentrations are higher in indoor residential settings compared to the outdoors, with observed levels being 2 to 20 times higher.[2] Smoking and cooking with oils are the main sources of acrolein indoors, but incense, wood-burning fireplaces, and gas stoves are also contributors.[2,38,39] Per cigarette smoked, between 3 to 220 µg of acrolein are generated, which can increase the concentration of acrolein within a room by 0.9 to 4.6 µg/m3.[5] Similarly, e-cigarettes have been shown to generate between 0.02 to 21 µg per puff, depending on the product.[2] Substantial e-cigarette use in residential settings are estimated to increase indoor acrolein levels by greater than 2 µg/m3.[40] Cooking or frying food in oil is also associated with increased acrolein levels. In one study, acrolein concentrations ranged from 26.4 to 64.5 µg/m3 five minutes after frying food in a well-ventilated apartment.[41] Studies measuring indoor air concentrations of acrolein in homes in Canada have found levels ranging from 0.1 to 9.1 µg/m3.[2,42]

Acrolein in outdoor air is generated during the combustion or organic matter and fuels.[2] Motor vehicles contribute the greatest emissions, with an estimated 3,000,000 kg emitted each year in Canada.[4] Additionally, aircraft and off-road vehicles emit acrolein, although the amount is not known.[2] Acrolein may also be generated through industrial processes, including incineration, pulp and paper production, oriented-strand board production, and coal electricity generation, but to a much lesser extent compared to vehicles.[4] Natural sources include forest fires and fermentation, but the estimated amount of acrolein released from these sources is not known.  The National Air Pollution Surveillance (NAPS) measured acrolein from 11 different sites across Canada from 2009 to 2013. Acrolein was detectable at all sites, and the median concentration varied from 0.033-0.75 µg/m3 (depending on sampling technique), with the maximum concentrations ranging from 0.999-1.58 µg/m3.[43] However, urban areas typically have less than 0.2 µg/m3, on average.[4]

Sources of releases to Canadian waters, sediments, or soils other than the application of acrolein-based pesticides have not been identified. Drinking water samples conducted in Ontario and the Atlantic provinces,[3,4] as well as surface water samples from the Great Lakes did not yield any detectable acrolein.[4,44] Acrolein has been detected in some foods, including molasses, white bread, and chicken breast muscle, as well as in foods that have been cooked in oil.[4] Overall, acrolein concentrations in foods are considered low (less than 1 µg/g).[3,4]

CAREX Canada has not estimated the extent of environmental exposure to acrolein and associated cancer risk. However, it has been estimated that on average, an adult inhales 26 µg of acrolein per day,[4] and that the exposure levels for non-smokers in a household with second-hand smoke is 2.2 to 3.7 times higher than those living without household second-hand smoke.[45] In addition, the World Health Organization has estimated that between 5% and 10% of the Canadian population is expected to be exposed to a 24 hour time-weighted average concentration of 5 µg/m3.[3]

Inhalation is the major route of exposure to acrolein at work, but dermal contact may also occur when acrolein is being used.[1]

Occupational exposure to acrolein occurs when wood, plastic, and petrochemical fuels are burned, when foods are cooked in oil, and when acrolein is being applied as a pesticide.[5] Those who work in high vehicle traffic areas are at increased risk of exposure, in addition to those who work near irrigation canals that are treated with acrolein.[5]

Acrolein exposure occurs within many occupations, including, but not limited to, workers within the following settings: plastic products, pulp, paper, paperboard, metal, glass products, and electronic equipment manufacturing; restaurant kitchens, bakeries, and food factories; shipyards; engine workshops; truck maintenance; pitch and coal coking plants; quarries; oil seed mills; and highway toll booths.[47,48] In addition, firefighters can be exposed to significant concentrations; for example, in a study of over 220 structural fires, firefighters were exposed to concentrations as high as 6.9 mg/m3 (6,900 µg/m3).[49]