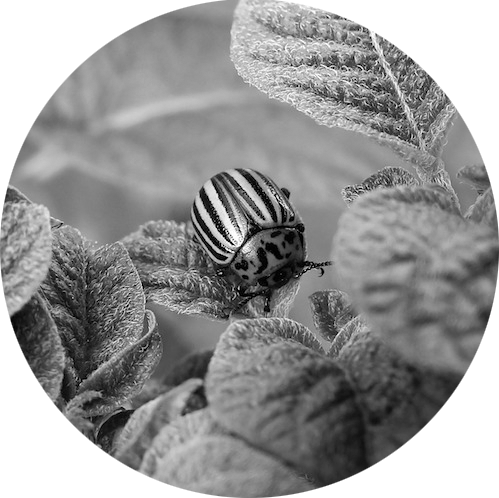 4,4′-Dichlorodiphenyltrichloroethane (DDT) is a white, crystalline insecticide.[1] First synthesized in 1874, DDT was not widely used until the 1940s. It has been used in forestry, agriculture, domestic settings, and warfare.[1] Although it was never produced in Canada and was banned in December 1990, DDT and its metabolites are present in our environment due to their persistent nature.[2] DDT is used in certain countries to combat malaria and in China in paints that impede the growth of barnacles and other marine
organisms.[3]

DDT is a persistent organic pollutant (POP), meaning that it is a chemically stable toxic substance that resists degradation.[4] It is considered “CEPA-toxic” under the Canadian Environmental Protection Act, and is able to bioaccumulate.[4] Environment Canada has targeted DDT and its metabolites for virtual elimination, with the goal of reducing releases to the environment to a level below which they cannot be detected.[5] Furthermore, Canada is a signatory to the Stockholm Convention, under which DDT is listed. The Stockholm Convention is a global treaty that aims to protect human health and the environment from persistent organic pollutants.[6]

In June 2015, the International Agency for Research on Cancer (IARC) classified DDT as Group 2A, probably carcinogenic to humans.[7] This classification was based on limited evidence of carcinogenicity in humans for non-Hodgkin lymphoma and cancers of the liver and testis reported in a number of studies published since 1992. There was sufficient evidence that DDT can cause cancer in laboratory animals and strong evidence that DDT affects several bodily mechanisms in humans. These effects include suppressing the immune system and increasing oxidative stress.[7]

Other non-cancer health effects are documented for DDT exposures. Acute oral exposures primarily target the central nervous system and can result in increased excitability, tremors, seizures, sweating, headache, nausea, vomiting, and dizziness.[8] Chronic oral exposures may change levels of liver enzymes in the blood, and may shorten lactation periods.[8] Long-term occupational exposure to DDT can result in chronic nervous system effects. These include a permanent decline in neurobehavioral functioning, such as paying verbal attention and synchronizing visual information with physical movement, as well as an increase in neuropsychological and psychiatric symptoms.[9]

DDT was not included in other Canadian government guidelines, standards, or chemical listings reviewed.

Most DDT uses were phased out in the mid 1970s. By 1985, the registration of all remaining pesticide uses of DDT was discontinued.[36] Existing stocks could be sold, used, or disposed of until December 1990, after which selling or using DDT was strictly prohibited and all existing stocks were disposed of. Currently, the manufacture, use, sale, offer for sale, and import of DDT is prohibited at the federal level.[36]

DDT was the first modern synthetic insecticide. It was initially used to control insect-borne diseases during World War II and to address mosquito-borne malaria.[1] In Canada, DDT was primarily used to control agricultural pests, including the codling moth on deciduous fruit, Colorado potato beetle, and European corn borer. It was also used to control forest pests, such as the gypsy moth and spruce budworm.[8] DDT was primarily applied using aerial and ground spraying techniques.[37] It was also used in domestic settings to control moths and lice.[8,37] While its use is banned in many regions, including North America and Europe,[1,6] DDT is still used agriculturally in some nations and is promoted in the World Health Organization’s efforts to eradicate malaria.[38]

The primary route of exposure to DDT and its metabolites in the general population is through diet.[8] DDT levels in air and water are currently low, and exposure to DDT in drinking water is considered negligible. This is because DDT is not very soluble in water and because standard drinking water treatment methods are efficient.[8]

Most DDT exposure through diet occurs through consuming meat, poultry, fish, and dairy products. Vegetables are also a source. Leafy vegetables tend to contain more DDT than others due to greater surface area for DDT to deposit onto the plant surface. Breast milk may also act as a source of exposure for infants,[8] although levels appear to be dropping following DDT bans in many countries.[41]

The 1998 Canadian Total Diet Study analyzed foods in Whitehorse for average DDT and dichlorodiphenyldichloroethylene (DDE, a breakdown product of DDT) residue levels.[42] The study indicated that average residue levels in food are generally below 1 µg/L. Where a maximum residue limit (MRL) had been established, DDT and DDE levels were less than 1% of the MRL.[31,42]

DDT can travel far distances in the atmosphere as a result of emissions or volatilization. It may deposit on the earth with the rain or on its own, and re-volatilize back into the atmosphere several times. This process is called “The Grasshopper Effect”. Since DDT tends to re-volatilize at a much slower rate in cold conditions, it accumulates in the colder, polar regions of the globe. This process is called “global distillation”.[8] Members of Inuit communities residing in Nunavut have significantly higher DDT and DDE blood concentrations compared to residents of Southern Canada.[1] Northern populations are at increased risk of exposure compared to the general population due to global distillation and due to their traditional diet. The traditional diet tends to include foods that are high in fat, such as seal and whale, in which DDT is more likely to accumulate.[31] Even so, levels of DDT in Arctic biota have typically decreased by more than 5% a year from the early 1990s to 2011.[48]

DDT and its metabolites are only slightly soluble in water and are highly soluble in lipids. In aquatic environments, DDT binds to sediments, which can then be ingested by organisms such as bottom feeders to bring DDT into the aquatic food chain. DDT rapidly biomagnifies up this food chain, resulting in higher levels at the top.[49] DDE is the metabolite that generally accumulates in humans.[31]

The half-life of DDT varies depending on the medium in which it is found. In air, DDT and its metabolites are quickly broken down by sunlight and have a half-life of approximately two days.[49] DDT in soil can break down in 2-15 years, with greater persistence in cooler temperatures and in soils with high pH.[8,49] In aquatic environments, DDT has a half-life of 150 years.[50] Volatilization of DDT and its metabolites may account for considerable losses from soil surfaces and water.[8]

Exposures can occur through dermal contact, and inhalation of dust or vapors in occupational settings.[8]

Because it is no longer produced or used in Canada, occupational exposure to DDT is not a concern. DDT remaining in historically-treated agricultural soils could volatilize into the air, resulting in exposures in those areas, but those exposures are relatively insignificant when compared to exposures during DDT production or formulation.[8,51]

CAREX Canada has not prioritized for exposure estimate development. This is because the likelihood of exposure in Canadian workers is very low.

DDT use has been restricted and banned for decades in Canada, which has significantly decreased exposures in workplace and community environments. Exposure to DDT and DDE in northern Aboriginal communities tends to be higher compared to those in southern Canada due to the reliance on traditional foods and higher deposition rates in polar regions. The Arctic Monitoring and Assessment Program (AMAP)[52], the Inuit Tapiriit Kanatami (ITK)[53], and several studies have stated that the overall benefits of eating a traditional diet outweigh any exposure risks, such that food advisories are not recommended.[1,54,55,56] The ITK has emphasized that the benefits of breastfeeding for infants outweigh the potential risks of exposure.[57]