Industries where the largest numbers of workers are exposed include automotive repair and maintenance, public administration (where firefighters are included), and taxi and limo service. According to the US Department of Labour, benzene exposure is also likely during petrochemical production, petroleum refining, coke and coal chemical manufacturing, tire manufacturing, and storage or transport of benzene and petroleum products containing benzene.[3]

Occupations at risk of benzene exposure include automotive service technicians and mechanics, delivery and courier drivers, taxi and limousine drivers, and firefighters. Other occupations such as steel workers, printers, rubber workers, shoemakers, laboratory technicians, and gas station employees were also identified as exposed.[3]

Results show that 360,000 Canadians (approximately 2% of the working population) are exposed to benzene in their workplaces; 89% of these workers are male.

The number of workers exposed to benzene decreased by approximately 14,000 workers from 2006 to 2016 (a 5% decrease). This was primarily driven by decreases in the number of workers in printing and rubber manufacturing as well as newspaper related industries

Workers exposed to benzene by industry in 2016 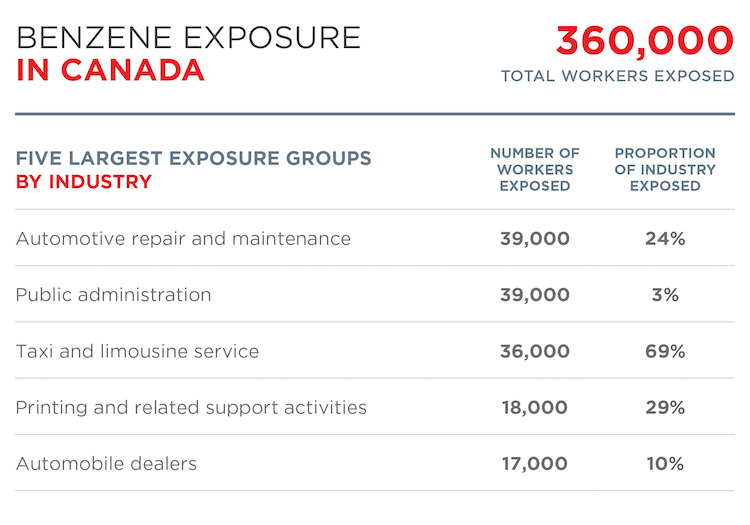 Workers exposed to benzene by region in 2016

Workers exposed to benzene by exposure level in 2016

Identifying industries with either 1) workers exposed to high levels of benzene or 2) a larger number of workers exposed to benzene is important in guiding cancer prevention efforts to prioritize exposed groups and target resources most effectively.

For example, in the transit and ground passenger transportation, which has the highest number of workers exposed, all of the workers fall into the low exposure category. However, in the printing and related support activities industry, a significant proportion (36%) of the exposed workers are in the moderate exposure category. Depending on the goals of a prevention campaign, exposure reduction in the large industrial group might be a useful strategy, or reducing exposure to those at highest risk of exposure could be seen as a priority.

Workers exposed to benzene by exposure level and industry in 2016

Data used in developing the occupational estimates for benzene were collected from several sources:

CAREX defines exposure to benzene as inhalation exposure at work to levels above those encountered in the general environment.

To determine the number of workers potentially exposed to benzene at work, CAREX occupational exposure experts used methods previously established in other peer-reviewed CAREX projects in Europe. A series of steps were taken to assign exposure proportions to occupations and industries at risk of exposure to benzene.

CAREX uses available workplace exposure measurements in the CWED to create exposure level categories by industry and occupation. For benzene, these categories are:

For benzene, the moderate and high exposure categories were combined due to very few workers exposed above 0.5 ppm.