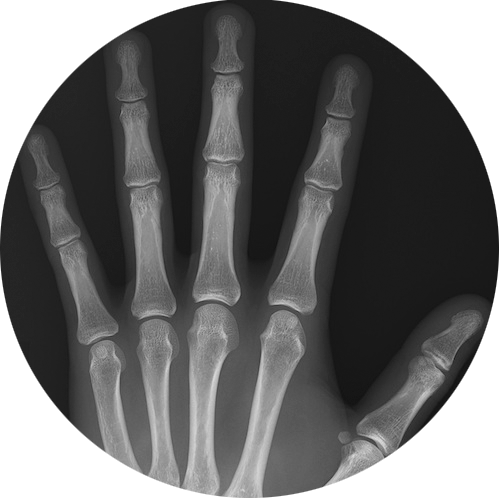 Ionizing radiation consists of particles or rays emitted by natural and artificial radioactive materials, nuclear reactions, and radiation producing machines.[1] An atom is said to be radioactive when the number of neutrons within its nucleus is too small or too large to match the number of protons; this mismatch results in an unstable nucleus. Radiation particles and rays are defined as “ionizing” when they carry sufficient energy to knock out electrons from molecules, such as water, protein, and DNA.[1] For a list of isotopes and radioactive compounds, please refer to synonyms listed in the Hazardous Substances Data Bank (HSDB).[2]

DNA is the most critical molecule for radiation damage, although other important cellular components are reportedly affected by exposure to radiation.[1] Overexposure to large amounts of ionizing radiation may result in health effects such as skin burns, hair loss, birth defects, cancer, intellectual disability, and death.[1] Exposure to substantial amounts of ionizing radiation to a fetus during pregnancy may cause negative pregnancy and birth outcomes, such as miscarriage, birth defects, hereditary effects, and a higher risk of childhood cancer and cancer in adult life.[7]

Ionizing radiation has been classified by the International Agency for Research on Cancer (IARC) as Group 1, carcinogenic to humans, in three separate monographs: Vol. 75: X and gamma radiation, Vol. 78: alpha, beta and neutrons, and, most recently, Vol. 100D, part of a volume reviewing all Class 1 carcinogens.[3,5,8] Epidemiological evidence has confirmed a strong association between ionizing radiation and leukemia, as well as cancers of the thyroid, breast, salivary gland, esophagus, bone, stomach, colon, skin, brain and central nervous system, kidney, and lung.[4] Many other cancer sites also show links with ionizing radiation exposure. The risk of developing cancer can be influenced by factors such as dose, dose rate, age, sex, genetics, lifestyle, environmental exposures, and time post exposure.[3,4]

For more information on radon, a naturally occurring radioactive gas, please refer to the CAREX Carcinogen Profile for Radon.

All nuclear facilities and devices, such as nuclear plants, medical radiation devices and uranium mines, are regulated federally by the Canadian Nuclear Safety Commission (CNSC).[9] The CNSC was established under the Nuclear Safety and Control Act in 2000 to replace the former Atomic Energy Control Board (AECB).[10] Under the Nuclear Safety and Control Act, the Radiation Protection Regulations established occupational exposure limits for ionizing radiation in Canada (shown in following table).[11] In exposure situations where the CNSC does not have jurisdiction, such as where radiation is used in healthcare settings, provinces and territories are responsible for setting and enforcing occupational exposure limits for ionizing radiation.

Canadian dose limits for exposure to licensed sources of radiation[11]

The American Conference of Industrial Hygienists (ACGIH, 2020) also have guidelines for exposure to ionizing radiation[12]:

MAC = maximum allowable concentration
NOTE: The radiological effects of multiple radionuclides in the same drinking water source are considered to be additive, therefore the sum of ratios of the observed concentration to the MAC for each radionuclide present should not exceed 1.[13]
mg/L = milligrams per litre
Bq/L = Bequerels per litre (bequerels: a measure of radioactivity)

Since x-rays were discovered in 1895, ionizing radiation has been used medically for diagnosing and treating benign or malignant disease. It was used in 80-90% of all imaging procedures in 1996.[2] Diagnostic procedures using x-rays include positron emission tomography,[4] radiographic imaging (most widespread use), fluoroscopic imaging, and computed tomography.[2,4]

Countries using ionizing radiation in the form of nuclear power include Canada (where 17% of the country’s electricity production share is nuclear), Germany (14%), Sweden (34%), France (76%) and the United States (20%).[14] In the military, materials and processes that emit x-radiation and gamma radiation are used to produce, test, and apply nuclear weapons.[4]

Sources of ionizing radiation may be found in various consumer products, such as smoke detectors, televisions, and radioluminescent clocks and watches.[4]

Canada opened its first Canada deuterium uranium (CANDU) reactor in 1971.[15] Today, there are 22 operational commercial nuclear power reactors across five plants located in Ontario and New Brunswick.[16] Two nuclear reactors are proposed for Ontario, and one in Saskatchewan.[17]

Canada is an international supplier of isotopes, including cobalt-60, heavy water, and tritium.[18] Canada was also the world’s largest producer of uranium until 2009, when it was overtaken by Kazakhstan; as of 2020, Canada accounts for 8% of world production of uranium, amounting to 3,885 tonnes. This uranium is produced at a Northern Saskatchewan mine.[19]

Over 80% of the general population’s annual dose is estimated to occur from exposure to natural background radiation, including cosmic radiation (from the sun and stars), radioactive elements in the earth’s crust (i.e. radon), and naturally occurring radionuclides such as potassium-40.[1,20]

An individual’s background radiation dose (from cosmic rays and naturally occurring radioactive material) may vary depending on geographic location and altitude.[1] The average annual radiation dose in Canada falls between 2-3 mSv.[21]

Consumer products, such as televisions and radioluminescent clocks and watches, may emit ionizing radiation, although there are restrictions on the maximum allowable radioactivity in these products.[4]

CAREX Canada estimates that 35,000-86,000 Canadians are exposed to ionizing radiation in their workplaces. The two largest industrial groups exposed are healthcare, and professional and scientific services industries. In terms of occupation, the largest exposed groups were nurses and aircrew members, followed by ward aids and orderlies.

Occupational exposure to ionizing radiation may also occur in the military, in research laboratories, in other industries using radiography or radioactive materials, and as a result of industrial accidents.[1,4,22] Occupations exposed to natural sources of radiation above typical background levels include uranium, coal, and other underground miners, airline crews, and astronauts.[1,4]

Canadians working in occupations involving exposure to radiation have been monitored by the National Dose Registry (NDR), which is maintained by the Radiation Protection Bureau of Health Canada, since the 1940s.[23] Although exposure levels vary across occupations, the average annual radiation exposure of a monitored Canadian worker is approximately 0.2 mSv.[24]