Inhalation, ingestion, wound contamination, and dermal absorption are all potential routes of ionizing radiation exposure.[1] CAREX Canada estimates that 35,000-86,000 Canadians are exposed to ionizing radiation in their workplaces.

​The two largest industrial groups exposed are healthcare, and professional and scientific services industries. In terms of occupation, the largest exposed groups were nurses and aircrew members, followed by ward aids and orderlies.

Occupational exposure to ionizing radiation may also occur in the military, in research laboratories, in other industries using radiography or radioactive materials, and as a result of industrial accidents.[2,3,4] Occupations exposed to natural sources of radiation above typical background levels include uranium, coal, and other underground miners, airline crews, and astronauts.[2,3]

Canadians working in occupations involving exposure to radiation have been monitored by the National Dose Registry (NDR), which is maintained by the Radiation Protection Bureau of Health Canada, since the 1940s.[5] Although exposure levels vary across occupations, the average annual radiation exposure of a monitored Canadian worker is approximately 0.2 mSv.[6]

Results show 35,000-86,000 workers were occupationally exposed to ionizing radiation in 2016†; 53% of these workers were male. The largest industrial group exposed was medicine‡, where exposure was from the use of ionizing radiation for diagnostic and therapeutic purposes. More women than men were exposed to ionizing radiation in the medical and shared industries while more men were exposed in all other industries listed. On an occupation basis, the largest groups exposed were nurses (27,000), aircrew members (15,000), and ward aids and orderlies (6,800).

†A range of exposure estimates have been calculated. Please refer to the methods for more information. The results on this page that are not presented as a range represent the upper limit of the calculated estimates.
‡Data from the National Dose Registry is not available by industry in the same way as census data, hence industry names here do not match those used in other occupational estimates.

Workers exposed to ionizing radiation by industry in 2016 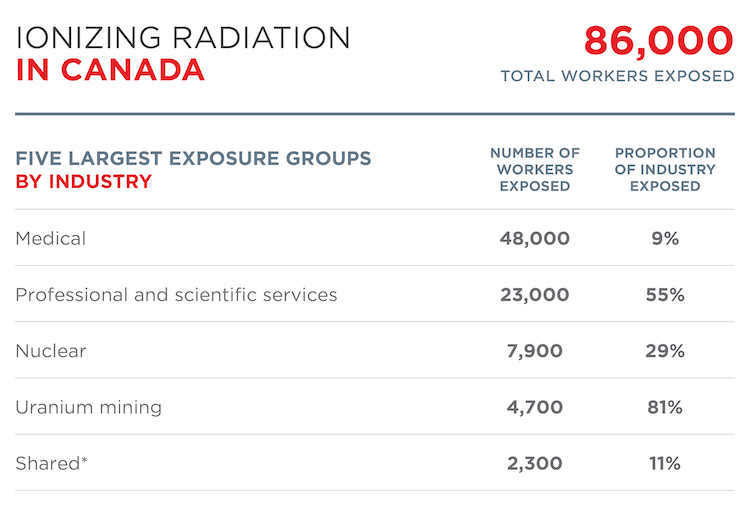 *Includes workers (e.g. administrators, office staff, and inspectors) who may be exposed across a variety of industry sectors.

Workers exposed to ionizing radiation by region in 2016

Workers exposed to ionizing radiation by exposure level in 2016

​Level of exposure by industry

*Includes workers (e.g. administrators, office staff, and inspectors) who may be exposed across a variety of sectors.

The 2016 National Dose Registry (NDR) survey data were used in developing the occupational estimates for ionizing radiation. The survey contains ionizing radiation exposure monitoring data for over 158,000 Canadian workers collected in 2016 and the results are available in a NDR annual report published in 2018.