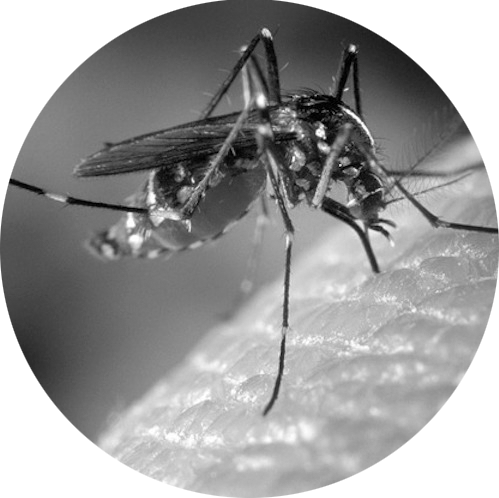 Malathion is an organophosphate insecticide. It’s appearance can range from a colourless to amber liquid, with a strong skunk or garlic-like odour. Malathion may also be known as its chemical name, which is O,O-dimethyl dithiophosphate of diethyl mercaptosuccinate.[1] As of late 2016, 26 products registered with the Canadian Pest Management Regulatory Agency (PMRA) contain the active ingredient malathion and of these, seven are registered for domestic use.[2] Trade names include Fyfanon® and Gardal Rose®.[2] Malathion was re-evaluated by the PMRA in 2012 and certain uses were subjected to a phase-out period. These uses include larval mosquito control and applications to greenhouse food and non-food crops, residential lawns, or livestock.[3]

Malathion is used as a broad-spectrum insecticide in the agricultural and domestic sector. It is also used to control fruit fly and adult mosquito populations, for example in campaigns to eradicate the West Nile Virus.[4]

The International Agency for Research on Cancer (IARC) reclassified malathion as Group 2A, probably carcinogenic to humans , in its 2015 assessment of five organophosphate pesticides.[5] IARC came to this conclusion due to limited evidence of carcinogenicity in humans for non-Hodgkin lymphoma and prostate cancer.[6,7,8,9,10] There was also sufficient evidence in animal and in vitro studies for carcinogenicity, DNA and chromosomal damage, and hormonal disruption.[11,12]

Malathion irreversibly binds to cholinesterase, the enzyme responsible for breaking down acetylcholine throughout the nervous system in humans, animals, and insects.[13] Malathion can be metabolized into malaoxon, which is substantially more toxic.[13] Human studies show that malathion reduces cholinesterase activity, and can also cause respiratory, gastrointestinal, and neurological symptoms.[4,14] In animals, malathion is a known endocrine disruptor, teratogen (disrupts embryo or fetus development), and reproductive toxin,[14,15,16,17] although these effects have not been confirmed in human studies.

Several provincial, territorial, and municipal governments have passed laws to reduce risk to human health and the environment from pesticide products, which may include a restriction on sales, production, or trade.[42,43] Although several provinces and one territory have implemented some form of cosmetic pesticide policy (QC, 2003; NB, 2009; ON, 2009; AB, 2010; PEI, 2010; NS, 2011; NL, 2012; YK 1994), only the Ontario and Nova Scotia legislation is considered strong enough to significantly reduce cosmetic pesticide exposure.[42] For example, Ontario’s Cosmetic Pesticide Ban Act, the most comprehensive restrictions on lawn and garden pesticides in North America, prohibits the cosmetic use of over 250 pesticide products and over 95 pesticide ingredients, including malathion.[44]

Malathion was first registered for use in Canada in 1953.[3] It was re-evaluated by the PMRA in 2012, and certain uses were subjected to a phase-out period; these uses include larval mosquito control, and applications to greenhouse food and non-food crops, residential lawns, or livestock.[3] Malathion is a broad-spectrum insecticide used in agricultural, commercial, and domestic sectors. It can be formulated into sprays, fogs, pellets, powders, shampoos, and lotions.[3,45]

Examples of malathion use in Canada include:

Since November 2006, the PMRA has tracked and reported sales information on Canadian pesticides. PMRA records show that more than 50,000 kilograms of active ingredient (kg a.i.) of malathion was sold in Canada in 2008, 2010, 2011, and 2012.[53,54,55,56] There was less than 50,000 kg a.i. of malathion sold in Canada in 2009.[57] Overall, malathion was not among the top 10 insecticides sold in Canada during the years reported. TradeMap lists malathion export and import data; however, reporting for pesticides is not standardized and the data is incomplete.[58]

The public may be exposed to malathion via inhalation or by touching objects with the chemical residue. People living near spray sites or in areas where this insecticide is used for West Nile Virus and mosquito control measures may be exposed.[13] Exposure to malathion may also take place by ingesting contaminated food or drinking water. Pesticide residues, including malathion residues, are monitored by the Canadian Food Inspection Agency (CFIA) under the National Chemical Residue Monitoring Program (NCRMP).[59]

Malathion may contaminate the environment at its site of production or use through accidental or intentional releases.[13] If malathion is released to air it may exist as a particulate or vapour. The vapour phase of this chemical is broken down into hydroxyl radicals with a half-life of five hours.[13] The particle phase may fall to the soil or water with rainfall or independently. The half-life of malathion in soil is 1-17 days, where it may volatilize back into the atmosphere, bind to soil particles, get taken up by plants, or be metabolized by soil microbes.[60] In water, it also binds to sediments, with a half-life of 10 days, or two days in the marine environment.[13] Malathion does not biomagnify or bioaccumulate.[13]