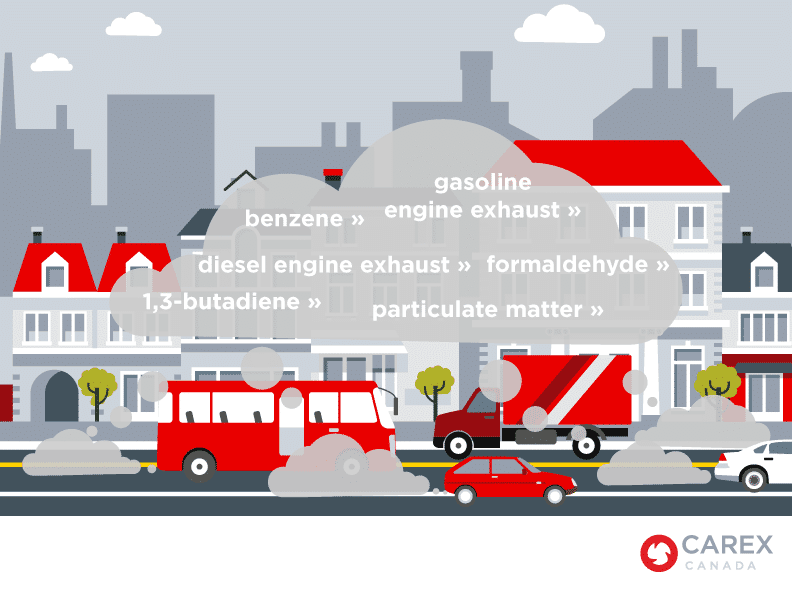 Approximately one third of the Canadian population is exposed to traffic-related air pollution (TRAP) where they live (defined as areas located 500m on either side of highways or 100m on either side of major urban roads).[1] Concentrations of air pollution can vary widely within a geographical area, but people living near major roads and traffic corridors can be exposed to higher levels of TRAP.[2] The main route of exposure to TRAP carcinogens is inhalation.

The International Agency for Research on Cancer (IARC) classifies outdoor air pollution as carcinogenic to humans, and exhaust from motor vehicles, or TRAP, is a major contributor to outdoor air pollution. Exhaust from gasoline and diesel engines is a complex mixture of substances that are formed as by-products of fuel combustion. This includes a number of known or suspected carcinogens, such as particulate matter (a mixture of a broad range of chemicals that vary in size), 1,3-butadiene, benzene, and formaldehyde, among others. TRAP also contains substances such as nitrogen oxides, sulphur dioxide, carbon monoxide, and ozone, which are linked to other health effects. This summary will focus on agents associated with cancer only.

CAREX Canada classifies carcinogens based on evaluations made by IARC and assesses potential exposure in the Canadian setting. Our environmental estimates help identify the highest priority traffic-related air pollutants linked to cancer. These include diesel and gasoline engine exhaust, as well as individual components found within this exhaust. Note that estimates are not available for a few of the substances on this list because data is lacking (i.e. particulate air pollution) or IARC has classified it recently (i.e. gasoline engine exhaust).

A number of strategies may help reduce environmental exposure to TRAP, such as decreasing traffic, improving emissions standards, and implementing land-use planning policies (for example, incorporating a buffer zone between major roadways and buildings where people live and work).[2] Visit our Exposure Reduction Resources page for more information.