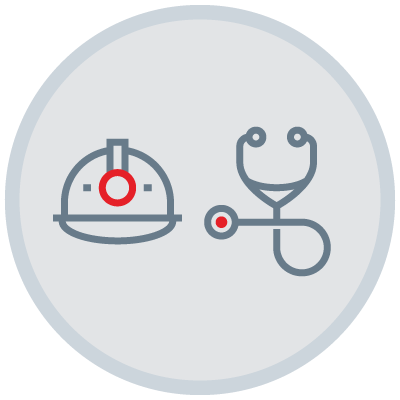 Inhalation and dermal absorption are the most important routes of exposure in occupational settings.[1] CAREX Canada estimates that between 9,000 and 14,000 Canadian workers are exposed to chlorothalonil in the agricultural sector. The majority of pesticides sold in Canada are used in agricultural (70% of active ingredients sold, by weight). For this reason, these exposure estimates focus on workers in the agricultural industry.

Exposure among these workers occurs during the mixing, loading, and application of chlorothalonil, but many more may be exposed during other, farm-related activities through contact with treated crops. Farm types with the largest number of exposed workers are fruit and tree nut farming, crop production, and greenhouse, nursery, and floriculture production.

Workers in other industries may be at risk of exposure to chlorothalonil. Workers involved in manufacturing or distribution facilities can be exposed via contaminated air or dermal contact.[1] Chlorothalonil is used in forestry, creating the potential for worker exposure in that industry, as well as in workers who work with the treated wood, such as wood processors and cabinet manufacturers.[1]

The farm types with the largest number of exposed workers are fruit and tree nut farming, crop production (for occupations that are not captured by the Census of Agriculture, such as contract workers); and greenhouse, nursery and floriculture production.

†Note: A range of exposure estimates has been calculated using different labour force data sources. Please refer to the methods for more information. The results on this page that are not presented as a range represent the upper limit of the calculated estimates (based on the Census of Agriculture, unless otherwise stated).

Workers exposed to chlorothalonil by industry in 2016 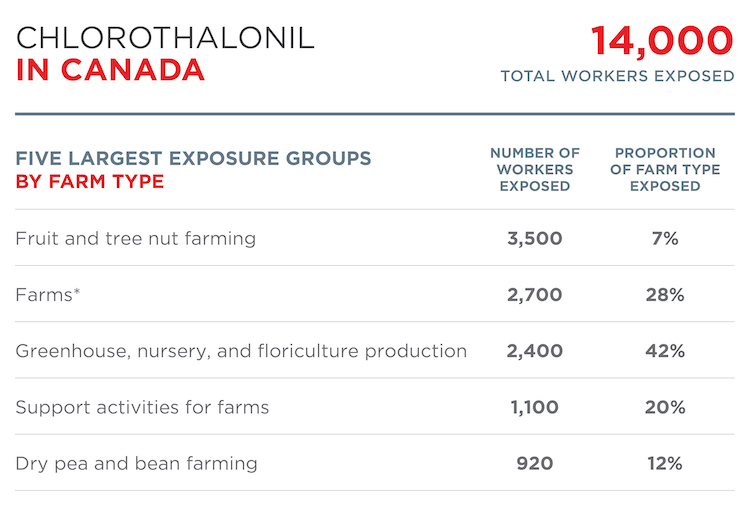 Workers exposed to chlorothalonil by region in 2016

Workers exposed to chlorothalonil by likelihood of exposure in 2016

Note: Total percentage may not add up to 100 due to rounding

Likelihood of exposure by industry

The table below shows the number of workers exposed by industry group and likelihood of exposure to chlorothalonil. These results highlight industries with the greatest number of workers, as well as the industries with the highest proportion of workers in the exposed category. Data is shown for those industry groups with at least 500 people in the exposed category. Depending on the goals of an exposure reduction campaign, reducing exposure in the largest group might be a useful strategy, or reducing exposure among those most likely to be exposed could be seen as a priority.

Data used in developing the occupational estimates for chlorothalonil were collected from several sources:

Methods were developed with input from a Pesticides Advisory Committee (PAC). The PAC comprised experts from Canada and the United States in exposure assessment, occupational epidemiology, and geography. The finalized methods yield estimates of the number (and proportion) of exposed agricultural workers by industry (North American Industry Classification System, NAICS) and province.

Second, we multiplied the proportion of farms applying “fungicides” by the total number of workers (by farm type) to identify workers at risk of exposure. This calculation was only completed for farm types that describe crops for which chlorothalonil is registered (e.g. wheat farms).

Third, we assigned likelihood of exposure (i.e. exposed, probably exposed, possibly exposed) to these workers using the methods described in the following section.

Finally, to complete the agricultural estimates, we added workers that are not captured by the Census of Agriculture (e.g. contract workers within the agricultural industry) but are at risk of exposure. These workers were identified using the Census of Population, and their prevalence and likelihood of exposure were assessed independently using CAREX Canada’s occupational approach. Because the Census of Population has less detailed labour force data than the Census of Agriculture, results are summarized for higher-level sectors (e.g. for “crop production”) instead of for specific farm types.

Workers who were identified as being at risk of exposure were qualitatively assigned exposure likelihood (i.e. exposed, probably exposed, and possibly exposed) using information on crop type, primary tasks, application methods, crop production practices, and the propensity with which pesticide residues transfer from crop foliage to skin upon contact.

Interpretation of the results and limitations

Both estimates (those based on the Census of Agriculture and the Census of Population) assume that if a specific farm type (e.g. wheat farms) applies fungicides and chlorothalonil is registered for use on the crop, that chlorothalonil is indeed applied. In actuality, there are multiple pesticide products registered for use on a single crop. Typically, farmers will choose just one or sometimes several products to apply to the crop. While we cannot assess the impact of this assumption due to limited data on chlorothalonil application rate by crop in Canada, chlorothalonil is a commonly used fungicide and the estimates are not expected to be significantly over-estimated.

We have assumed that farm types only grow the crops that they describe (e.g., that potato farms only grow potatoes). However, farm types are classified based on the predominant type of production (the crop, or crop type, that contributes most to the estimated receipts). By assuming that farm types are restricted to growing crops described by their classification, the total number of workers exposed may be underestimated. The degree to which this occurs is not likely to be quantifiable due to limited data on the types of crops grown together on specific NAICS farm types.