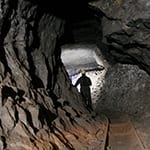 Thanks to a collaborative effort with scientists from the Occupational Cancer Research Centre, our occupational exposures team was able to estimate the levels of exposure to diesel engine exhaust in Canadian workplaces. Results show the majority of workers exposed to diesel exhaust are in the low exposure category, with a significant number at risk for moderate to high exposure.

Diesel exhaust is a known carcinogen and among the most prevalent occupational exposures in Canada; our estimates show that approximately 897,000 Canadians are exposed to diesel exhaust at work. In mining-related industries, where underground work increases the possibility for exhaust to accumulate, the majority of exposed workers fall into the highest exposure category. In transportation industries, the majority of exposed workers are in the low exposure category.

A summary of exposure level results by industry is available under the Levels of Exposure for diesel engine exhaust on our website. The approach used to calculate levels is described under the Data Sources and Methods tab.

These estimates were used to inform initial estimates for burden of workplace exposure to diesel exhaust.

Our partners at the Occupational Cancer Research Centre recently presented preliminary results on the burden of workplace exposure to diesel engine exhaust, upgraded in 2012 to a known human carcinogen. This work is part of a major project funded by the Canadian Cancer Society to apply CAREX Canada estimates to calculate the current burden of occupational cancers in Canada.

Estimates show that between 1961-2001, approximately 1.4 million Canadian workers were exposed to diesel engine exhaust at work. Preliminary calculations show that the proportion of new cancer cases and cancer deaths that can be attributed to this exposure is: 4.92% for males, 0.29% for females, and 2.70% overall. These estimates are somewhat higher than those reported by a recent occupational cancer burden project in Great Britian (1.3-1.8%). The Canadian estimates were developed using the most recent evidence for the risk of lung cancer from occupational exposure to diesel engine exhaust, as well as detailed historical exposure assessment for diesel exhaust from CAREX Canada and detailed labour force models.

More information about this project can be found on our Burden of Cancer page and on OCRC’s website.