Environmental exposure to lead can occur through food, drinking water, air, soil, dust, and various consumer products.[1] Ingestion of lead from dust, paint chips, and soil is of concern for young children in particular.[2] The relative contribution to an individual’s exposure will depend on factors such as proximity to a point source, age of home and projects undertaken involving lead-based products.[3] CAREX Canada’s environmental estimates indicate that lead concentrations in indoor air do not result in an increased risk of cancer (low data quality). However, CAREX Canada estimates that lead concentrations in indoor dust result in an increased risk of cancer (moderate data quality).

Food has been a primary contributor of lead exposure in the past. However, since lead solder is no longer used in cans, current levels of exposure through ingesting food are generally low. Lead can enter food grown in contaminated soils, stored in containers with lead-based glazes or in leaded crystal.[1] CAREX Canada estimates that lead concentrations in food or beverages do not result in increased risk of cancer (low data quality).

Lead was phased out of paints in Canada, beginning in 1976. Some specialty coatings such as artists’ paints may still contain lead, but all lead-containing products must be labeled.[3] Renovation projects in older homes involving stripping or removing lead-containing paints, particularly using heat, can result in significant exposures.[1]

Most lead was removed from gasoline in the 1970s. Since then, levels in Canadian air have been generally lower, although smelters and refineries can be significant contributors to both outdoor air and soil levels.[3] CAREX Canada estimates that lead concentrations in outdoor air do not result in an increased risk of cancer (moderate data quality).

Lead in drinking water in Canada is generally low. However, lead levels can be higher in older homes and ones with lead solder in the piping.[3] CAREX Canada estimates that lead concentrations in drinking water do not result in an increased risk of cancer (moderate data quality).

Lead is one of the substances selected for the Canadian Health Measures Survey (CHMS), a joint project of Statistics Canada and Health Canada to establish the current level of exposure to environmental contaminants.[4] The second cycle of the survey was completed in 2011 and a second report on human biomonitoring of environmental chemicals was released in April 2013.

The biomonitoring data from the second cycle of the CHMS, which included 6,400 Canadians, found the geometric mean blood concentration for lead to be 1.2 µg/dL. This level is approximately 0.1 µg/dL lower than the average blood lead levels found during the first cycle of the CHMS (completed in 2009) and substantially lower than in 1978, when the national levels were last measured prior to the CHMS.[5] In the third cycle of the CHMS in 2012-2013, the geometric mean was 1.1 µg/L, which was again 0.1 µg/L lower than the previous measurement. Smokers were found to have significantly higher levels of lead in their blood than non-smokers.[6]

Searches of Environment Canada’s National Pollutant Release Inventory (NPRI) and the US Household Products Database yielded the following results on current potential for exposure to lead in Canada:

Potential lifetime excess cancer risk (LECR) is an indicator of Canadians’ exposure to known or suspected carcinogens in the environment. When potential LECR is more than 1 per million in a single pathway, a more detailed risk assessment may be useful for confirming the need to reduce individual exposure. If measured levels of lead in relevant exposure pathways (outdoor air, indoor air, indoor dust, drinking water, and food and beverages) decrease, the risk will also decrease.

The calculated lifetime daily intake and LECR results for lead are provided in the tables below. For more information on supporting data and sources, click on the Methods and Data tab below. 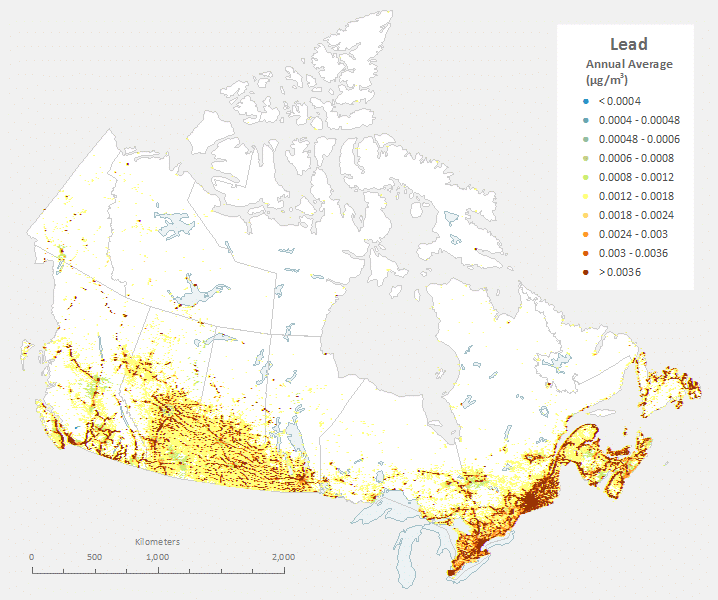 Data sources and data quality for lead can be found in the PDF below.