Inhalation is the most important route of occupational exposure.[1] The potential for exposure exists in petroleum refining, as well as during production of purified butadiene monomer, various butadiene-based rubber and plastic polymers, and rubber and plastic products, such as tyres, hoses and a variety of molded objects.[2]

Results show that approximately 4,000 Canadians are exposed to 1,3-butadiene in their workplaces; 83% of these workers are male. The largest industrial groups exposed are rubber products, basic chemical, and plastic product manufacturing.

Workers exposed to 1,3-butadiene by industry 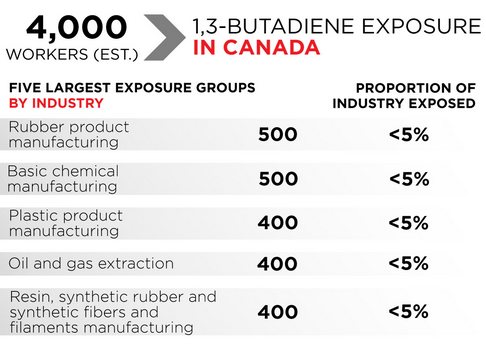 Workers exposed to 1,3-butadiene by region

Data used in developing the occupational estimates for 1,3-butadiene were collected from several sources:

CAREX defines exposure to 1,3-butadiene as inhalation and dermal contact at work above levels encountered in indoor or ambient air when there is no additional source of combustion (i.e. wood fire smoke or cigarette smoke).

To determine the number of workers potentially exposed to 1,3-butadiene at work, CAREX occupational exposure experts used methods previously established in other peer-reviewed CAREX projects in Europe. A series of steps were taken to assign exposure proportions to occupations and industries at risk of exposure to 1,3-butadiene.