Inhalation is the most important route of occupational exposure to silica.[1]

CAREX Canada estimates that approximately 380,000 Canadians are exposed to silica in their workplace.

The largest industrial group exposed is construction. In terms of occupation, the largest occupational groups exposed to silica were construction trades labourers, heavy equipment operators, and plasterers and drywallers.

Exposure to crystalline silica, especially quartz, may also occur in a number of other industries and occupations due to its wide and variable use.[2] Workers can be exposed in industries such as mining, agriculture, and various manufacturing industries.[1,2,3] Job tasks that are typically associated with exposure to silica include grinding, sandblasting, crushing, chipping, mixing, and plowing.

Results indicate that approximately 380,000 Canadians are occupationally exposed to silica; 93% of these workers are male. The largest industry exposed is construction, where the building construction industry and trade contractors together account for approximately 54% of exposed workers.

Workers exposed to silica by industry 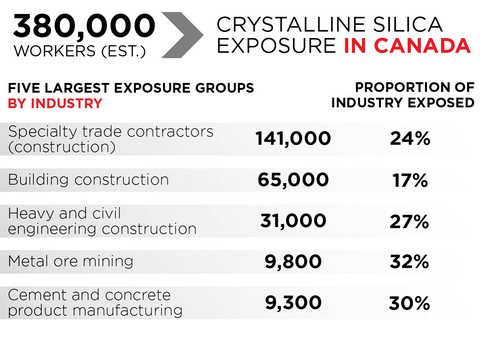 Workers exposed to silica by region

In total, approximately 380,000 Canadians are exposed to silica in their workplaces. The majority of workers exposed to silica are in the high exposure category. A significant number of silica-exposed workers are also at risk of low and moderate exposure.

Identifying industries with either 1) workers exposed to high levels of silica or 2) a larger number of workers exposed to silica is important in guiding cancer prevention efforts to prioritize exposed groups and target resources most effectively.

The table below shows the number of workers exposed by industry group and level of exposure to silica. These results highlight industries with the most number of workers, as well as industries with the highest levels of exposure. Data for those industries with at least 5,000 workers exposed is shown. For example, in the construction industries (236, 237, 238), the largest industrial groups, the majority of exposed workers are in the high exposure category (as of 2018 updates to our silica estimates). In other industries, such as Truck Transportation, where exposure sources are more dispersed and ventilation may be better, workers fall into the low exposure category. Depending on the goals of a prevention campaign, exposure reduction in the large industrial group might be a useful strategy, or reducing exposure to those at highest risk of exposure could be seen as a priority. For silica, these two strategies both highlight the construction industry.

Data used in developing the occupational estimates for crystalline silica were collected from several sources:

To determine the number of workers potentially exposed to crystalline silica at work, CAREX occupational exposure experts used methods previously established in other peer-reviewed CAREX projects in Europe. A series of steps were taken to assign exposure proportions to occupations and industries at risk of exposure to crystalline silica. Please note that the 2018 data update described in the Data Sources section above did not affect the prevalence of exposure, only the exposure levels.

A group of workers is put in this exposure category if both these criteria are met: