The group of workers with the largest number of exposed individuals is trades, transport, and equipment operators. This group also has the highest rates of exposure, with an estimated 9% of workers being exposed. Other occupation groups with SHS exposure are sales and service, primary industry, and management.

According to the Burden of Occupational Cancer in Canada project, occupational exposure to SHS leads to approximately 130 lung cancers and possibly 20 suspected laryngeal cancers and 35 suspected pharyngeal cancers each year in Canada, based on past exposures (1961-2001).[1,2] This amounts to 0.6% of all lung cancers, 1.6% of all laryngeal cancers, and 2.4% of all pharyngeal cancers diagnosed annually. These estimates are focused on non-smokers due to difficulties in separating the impact of personal smoking and SHS exposure on cancer risk. Most SHS-related lung cancers occur among workers in the manufacturing and trade industries. Work-related SHS exposure resulted in approximately $129 million in costs for newly diagnosed lung cancer cases in 2011.[2]

Approximately 2%, or 418,000 workers, are exposed to SHS in the workplace. The largest number of exposed workers occurs in Ontario and Quebec (123,000 and 85,000 exposed, respectively); however, Newfoundland has the highest proportion of workers exposed (4%). The bulk of workplace exposure occurs in the trades, transport, and equipment operating occupation (235,000), followed by sales and service (44,000) and primary industry (36,000). However, the occupations with the highest proportion of workers exposed are trades, transport and equipment operating occupations (9%) and occupations in primary industry (6%).

Workers exposed to second-hand smoke by occupation in 2016 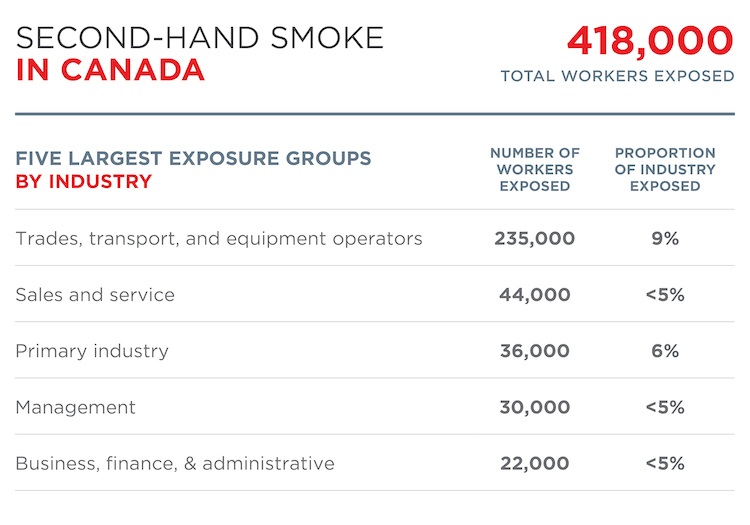 Workers exposed to second-hand smoke by region in 2016

In total, approximately 5.0 million Canadians reported exposure to SHS in the workplace. Of these, an estimated 418,000 (8%) are considered exposed and 4.6 million (92%) are considered possibly exposed.

Workers exposed to second-hand smoke by exposure level in 2016

Level of exposure by occupation

Data used to develop the occupational estimates for SHS were collected from several sources:

CAREX considers exposure to second-hand smoke (SHS) as inhalation exposure in workplaces, including outdoor workplaces and company vehicles, above those encountered in the general environment. 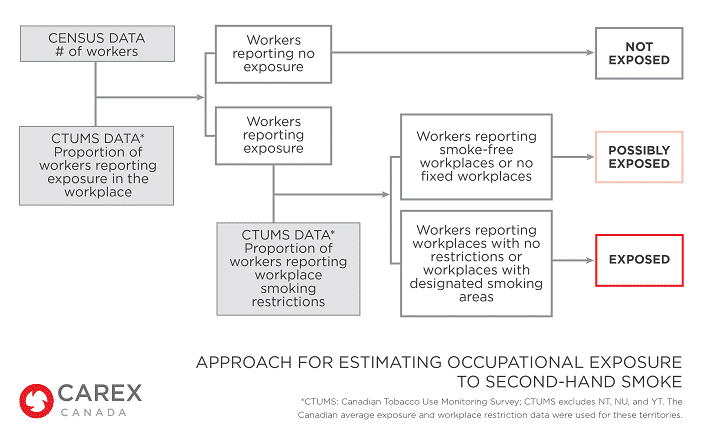 Because the territories were not captured by CTUMS, we applied Canadian proportions of self-reported exposure and workplace restrictions to Nunavut, the Northwest Territories, and the Yukon labour force data.

To create exposure level categories by occupation, CAREX used information on workplace smoking restrictions from CTUMS. Where evidence of exposure was less clear, workers were classified as possibly exposed.

A group of workers is put in this exposure category if they reported exposure in the workplace and if they were apportioned to the smoke-free workplace or no fixed workplace categories.

A group of workers is put in this exposure category if they reported exposure in the workplace, and if they were apportioned to the designated smoking area category or no workplace smoking restriction category.