Inhalation of bitumen fumes and dusts is the most important route of occupational exposure.[1] For bitumens used in cooler temperatures, such as cutback bitumens, blended bitumens, and bitumen emulsions, regular skin contact may also occur.[2] CAREX Canada estimates that approximately 58,000 Canadians are exposed to bitumens in their workplaces.

The largest industrial groups exposed are highway, bridge, and street construction, followed by contractors in foundation, structure, and building exterior, finishing, and equipment.

The largest occupational groups exposed are construction trades helpers and labourers, followed by heavy equipment operators and roofers and shinglers. Other occupations potentially exposed to bitumens include those employed in refineries, asphalt mixing plants, and roofing material manufacturing,[2,3] as well as workers involved in transporting and storing bitumens.[1]

Results show that 58,000 Canadians are exposed to bitumens in their workplaces; 94% of these workers are male. The largest exposed industrial groups are in the broad category of construction. This includes highway, bridge, and street construction, and contractors in foundation, structure, and building exterior, finishing, and equipment.

Workers exposed to bitumens by industry in 2016 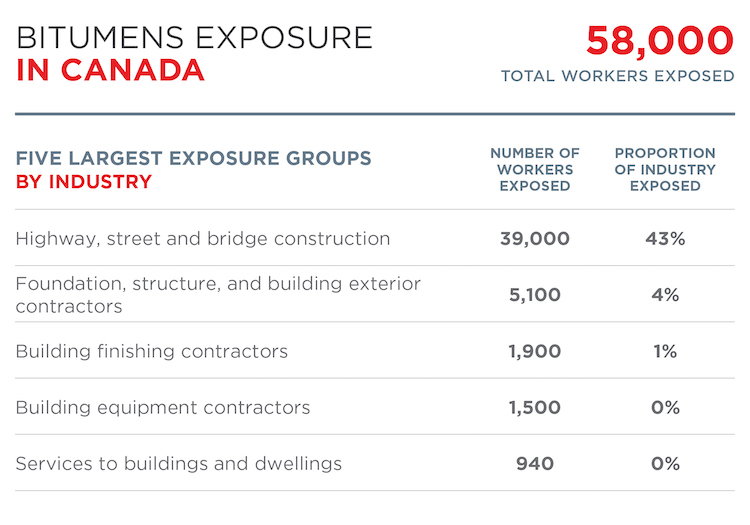 Workers exposed to bitumens by region in 2016

Data used in developing the occupational estimates for bitumens were collected from several sources:

CAREX defines exposure to bitumens somewhat differently than for other agents. In the most recent IARC monograph focusing on bitumens, exposure was defined as it links to specific jobs and tasks; therefore we have taken a very similar approach in our updated exposure estimates. We define exposure to bitumens in the following ways:

IARC does not include the production of roofing and paving materials, but this exposure scenario is mentioned often in the literature, and heating of the materials is very likely to occur in these settings and cause similar emissions, and thus similar exposures to workers. IARC does, however, include exposure during mastic asphalt work, but this is not known to occur in Canada so we have not considered it further in our estimates.1

Since a wide variety of compounds are released into the air when bitumens are heated, respiratory exposure to bitumens have been studied by measuring many agents. These agents include total particulate, volatile organic compounds, fumes released as cyclohexane- or benzene-soluble matter, and various PAHs. For this reason, there is likely to be some overlap between PAH exposure and bitumens exposure in our CAREX estimates.

To determine the number of workers potentially exposed to bitumens at work, CAREX occupational exposure experts used methods previously established in other peer-reviewed CAREX projects in Europe, in addition to new information available in the recent IARC evaluation of bitumens. A series of steps were taken to assign exposure proportions to occupations and industries at risk of exposure to bitumens. 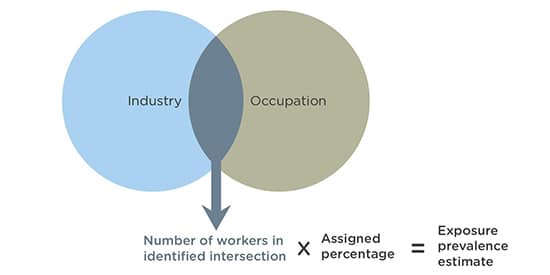