Exposure to UVR may be dermal or ocular.

Artificial UVR exposure may be mitigated through engineering controls (such as enclosures), however in some applications workers can be exposed by reflection or scattering from adjacent surfaces, a phenomenon that is particularly concerning for tanning appliance operators.[1]

Results show that approximately 141,000 Canadians are potentially exposed to artificial UV radiation at work; 78% of these workers are male. The largest industrial groups exposed are commercial and industrial machinery repair (where many welders are captured) and Personal care services, where tanning salons are captured, in addition to nail salons (where artificial UV radiation is used in the curing of fingernail gels).

The largest occupational groups exposed are welders (87,000 workers), medical laboratory technologists and pathologists’ assistants (6,400), and sheet metal workers (exposed via welding or proximity to welding, n=5,300). The majority of workers in welding are male (96%), while a larger proportion of those in tanning salons and hospitals are female (87% and 83%, respectively). 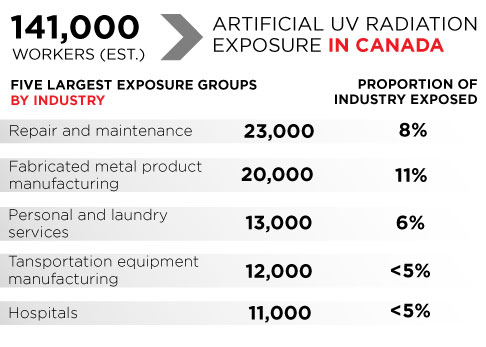 For example, in the largest exposed industry (Repair and Maintenance), the majority (85%) of workers are exposed via welding and are in the highest category of exposure. However, in the personal services industry (where tanning salons are located), all of the exposed workers are in the low exposure category. Depending on the goals of a prevention campaign, exposure reduction in the large industrial group might be a useful strategy, or reducing exposure to those at highest risk of exposure could be seen as a priority.

Data used in developing the occupational estimates for artificial UV radiation were collected from several sources:

To develop estimates of the levels of artificial UV exposure, we used a report by the International Commission of Non-Ionizing Radiation Protection (ICNIRP)1. This report classified exposure to artificial UV radiation into categories of low, medium, high, and very high with respect to the potential for overexposure. The only source classified with a low potential was exposure to general lighting, which we do not include as exposed in our definition of occupational exposure. Therefore, we defined our exposure groups based on their medium, high, and very high potential for overexposure categories:

A group of workers (people in the same job category) is put in this category if the ICNIRP found that there was a medium potential for overexposure.

A group of workers (people in the same job category) is put in this category if the ICNIRP found that there was a high potential for overexposure.

A group of workers (people in the same job category) is put in this category if the ICNIRP found that there was a very high potential for overexposure.